Stages 2 and 3- Integrating with the Tour 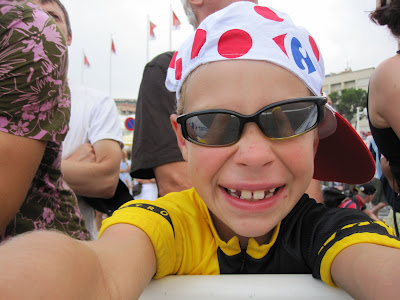 What is better-- the knife, the fork, or the spoon? For the last few nights, this is one of the conversations that Liam and I have been having at dinner. I always end up choosing the fork and Liam chooses the spoon. It is a funny little discussion, but one the has made me realize that as much as I am bringing Liam into the adult world, he is bringing me into his, the world of the eight year-old. Our relationship and bond has grown an incredible amount on this trip.

It has taken us a few days to adapt to following the Tour de France. It is a race that is constantly in motion and covers huge distances each day. You have to get into the rhythm of the race, and finding this rhythm takes some time. The second and third days of the Tour were great days, but somehow we weren’t quite in sync with the race.

On Sunday, stage 2 was from Monaco to Brignoles. Liam and I had studied the map and decided to hit the race at the finish in Brignoles. The logistics of moving down the road each day require some planning, and we got a late push off from Nice. It was about a two-hour drive from the Cote d’Azur to the race finish in the heart of the Var. While in route we knew we were headed the right direction by all the race support vehicles at the rest stops and on the road. Liam was excited to be driving next to the team buses and French Television cars. As we approached the finish town, however, the road was blocked and only race support vehicles could get through. We got diverted onto a country road and ended up in a pine forest about ten miles away from the town. 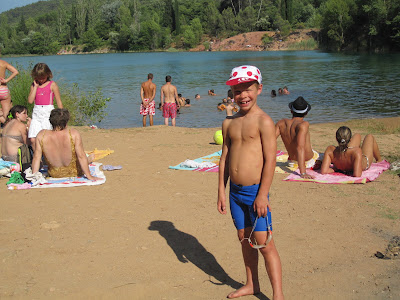 On the Lake Outside Brignoles

I have learned that instead of getting frustrated by these detours, the better approach is to make the best of what ever you run into. On this day in France, Liam and I ran into a lake that was about two miles from where the race would pass by. It was a very hot day so what better place to wait for the race to come by. We spent about an hour by the lake among the French picnickers. Liam and I swam across the lake a few times – Liam is on a swim team in California and hopes to be going to the Junior Olympics this spring. Liam met a few kids his age who were very impressed by his swimming. As we were leaving to go to watch the race, I looked back to see a group of French children trying to do the butterfly. Sport transcends language, culture, and generations. We got on our bikes and headed to a good spot to catch the Tour as it rolled down this country road in France. 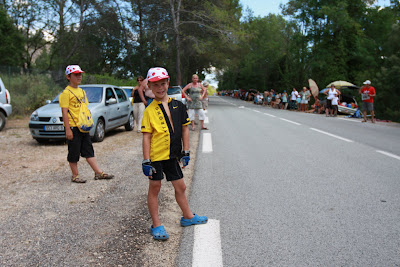 It was a great place to watch the race and be able to get a good snapshot of the people and culture of the Var. The Varois as they are called are about as close to country folk as you get in France. We made conversation shared a picnic and had a great time just standing on the side of the road. After the riders past, we returned to the lake to spend the rest of the afternoon. 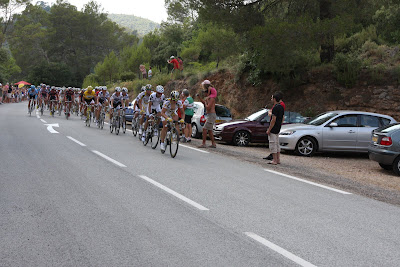 When we got into Brignoles later that evening I had almost forgotten about the race. When someone in the café asked me about race, I realized that I didn’t even know who had won that day's stage. The race had been a backdrop to our day, but the lake and our time there, as well as our time meeting the people of the Var had been the main event. 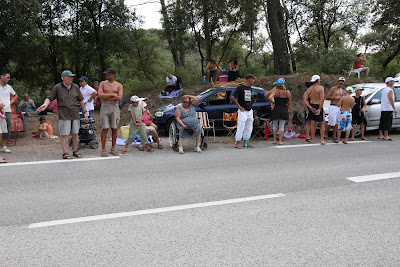 People from the Var are called Varois

The next day the race started down in Marseille and finished at a modern beach resort in the town of La Grande Motte. Everything was on schedule for an early departure until we ran into a snag at the gas station. When I went to pay for the gas the female attendant said that my credit card was not valid. I had just paid for the hotel and bought our breakfast at the market with the same credit card. I gave her another card…same result. There was no convincing her that there might be a problem with her machine. I left the car and my driver’s license at the station and headed into town to find an ATM. The first bank I came to was out of order, the second and third as well. The Tour de France had just finished in this town the day before. I guess a lot of people were using the ATMs because apparently they were out of cash. At the forth and final bank in the town, I was finally able to get some cash. I returned to the station to a scene of mayhem. Five other cars were pulled over beside mine with their drivers headed into town, with a line of five other cars trying to pay. As we pulled out of the station, I was wondering just how much cash that final bank machine in town would have. It was another adventure for Liam in that silly adult world of financial transactions. 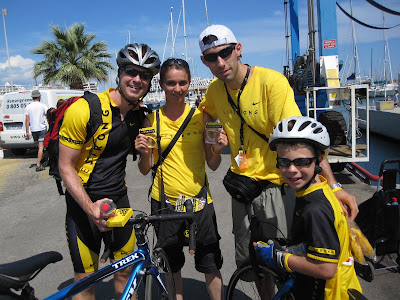 We arrived at the La Grande Motte a few hours before the riders would finish there. It was enough time for a bike ride and a swim in the ocean. It was at this town that we also found the best place to watch the finish of the race. There is a VIP section called the Club Tour de France. It consists of a trailer that turns into a kind of two-story restaurant. The VIPs can watch the race finish from the top of the trailer or from the roped off area in front which is set up with tables for sipping champagne. There is always a big screen monitor here, as well, with television coverage of the Tour. From the roped off sides you get a good view over the champagne tables of the riders as they come by and you can also follow race developments from the monitor. 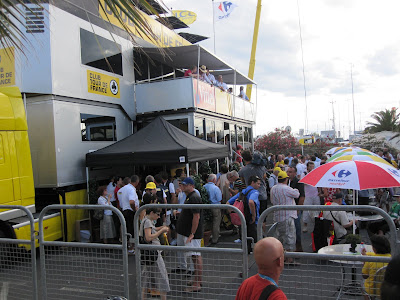 The race into La Grande Motte was a flat stage that everyone was thinking was going to be uneventful, including some of the riders who missed out on a very important split in the peleton in the final stages of the race. Lance Armstrong and two of his teammates were able to get into this split. By the end of the day, Lance had moved up from 10th to 3rd place in the race. In the final kilometers of Stage 3 the race had fundamentally changed. Liam and I were there, in France, watching it all unfold. It has taken a couple of days, but we are finally starting to get integrated into this train across France.
Posted by Bill & Liam Flanagan at 11:04 PM