Morzine is a beautiful French village high in the Alps. Liam and I have really loved this town since our first visit in 2006. The town sits at the confluence of six mountain valleys, and it has a great mountain feel to it. It is also, from Morzine, that Liam climbed his first Alp, the Col de La Joux Plane, last year before the 2009 Tour de France. In the winter the town is a thriving ski resort, and during the summer it converts into a mountain biker's paradise. The bikers take the ski lifts up, and then they bomb down the descents dressed like gladiators. We were in luck because Morzine is the location of two stages of this year's Tour de France, and the town is where the riders will spend this year's first rest day.

When we are in Morzine, we have always stayed at the Hotel Le Cret. Le Cret is a charming chalet style hotel with a pool and spa! We were looking forward to stayjng there again. It turned out that when we arrived we had an extra surprise -- Team Radio Shack would also be staying at the hotel! 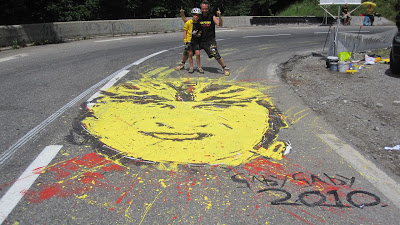 Gaby and Liam with the portrait of Lance

Saturday afternoon, Liam and I climbed Avoriaz from our hotel in the rain. Avoriaz is a catagory 1 climb, and from town the ride was about 12 miles up to the finish or 25 miles roundtrip. Even in the rain it was a beautiful ride! The next day (the day of Stage 8) we climbed the mountain again -- This time in the sun and heat. This was a welcome sight as our friend Gaby Zwaan, the Dutch artist, was painting a portrait of Lance Armstrong on the road of the climb. We met up with Gaby as he was starting his work. It was really incredible to see him paint. He actually becomes part of the piece with paint all over his shoes and clothes. This is perhaps why his pieces have so much energy The finished work was fantastic!

On the climb we also met up with Amen from Austrailia on the road. Amen is an avid bike rider and photographer. You can check out his work at www.procyclingimages.com It is always great to meet fellow cyclists on the road. It seems that on a bike friendships develop in just a few miles!

Unfortunately, Team Radio Shack had a tough day on the road. The team, however, still looked very strong on the last climb of the day. Levi Leipheimer was up with the lead group and Chris Horner came flying by us on the road. Even Lance Armstrong who had had several crashes looked strong as he rode by. 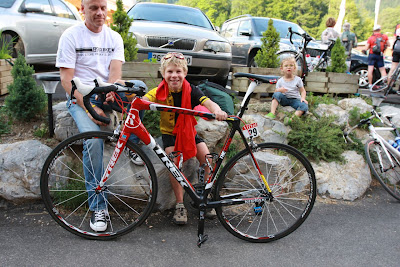 Back at the hotel we met up with Joe and Ben from Trek and watched the riders roll in from the stage. Liam even got an up close view of on of the Trek "Shack" racing bikes! Although the team had had a tough day spirits were still high. They are truly an awesome group of people! 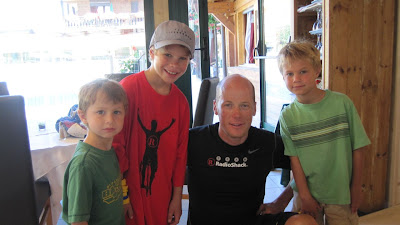 The Boys with Chis Horner at breakfast

Today is the rest day in Morzine. At breakfast this morning, Chris Horner stopped by our table! He is a really cool guy, and he looked very strong. Look for Chris to do something very special out on the road latter in this Tour!

This is Bill and Liam reporting from the rest day in Morzine.