The finish of stage 2 of the Tour de France was in Spa, Belgium. Spa is a beautiful town located in the hills of eastern Belgium. We decided to go to Spa one day in advance to explore the area. The drive from Rotterdam took us about three hours. We pulled into Spa at 5 o'clock in the afternoon with enough time to explore the town on foot. The town is in the French speaking part of Belgium with ample brasseries and cafes. It is built around a central plaza and casino with natural springs surrounding the town. The boys were up for some exploration so we took a hike in the hills above town. The area is truly beautiful. 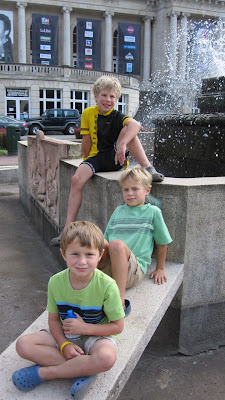 The central Fountain in Spa

One drawback to traveling with a family of five is that no hotel seems to want to rent us just one room. We are so used to traveling that one room works fine for us, however, we have a hard time convincing people of this. The hotel in Spa wanted to charge approximately 500 euros for one night for two rooms. This wasn't going to work. Plan B was to drive the part of the course we had planned to ride in the morning and find a Hotel or B & B that would be more family friendly. We found just what we were looking for in the village of Stavelot, a cobble road town about 20 miles away from Spa on the route of the day's Tour Stage. 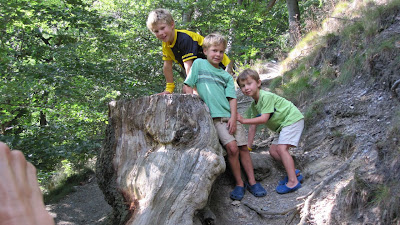 Exploring the forest above Spa

After a meal on the town square, we were in luck because a small fair was in town. Fairs are somewhat universal -- bumper cars, pony rides, target games to win stuffed animals, and a certain quality of light that gives it that carnival atmosphere. 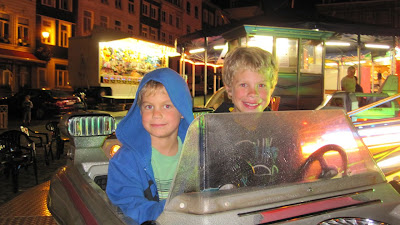 Boys at the fair in Stavelot

On Monday, the day of the stage, we were up early in Stavelot and headed out on the course to ride a 30 mile loop or so in the hills. About 5 miles into our ride we headed into the town Trois Ponts. I saw a father and son dressed in the kit of a local Belgian cycle club. I wanted to make sure that we were on the right course for the Tour de France so we pulled over to ask. It turned out that the pair were getting ready to participate in an event that was part of the Tour de France. In 40 minutes a group of youths from local Belgian cycle clubs and, their parents if they wished, would be able to ride the final 30k of the bike race and sprint the final kilometer of the race across the finish line. This would all be under escort from two vehicles and several motorcycles. As more people started arriving the organizer saw Liam and me and asked us if we would like to participate. It was our lucky day! 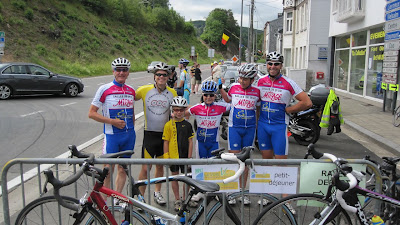 The ride was fantastic. We climbed the final catagory 3 climb and then bombed down into town under escort. The only hold up was at the final 2k into the finish we got stuck behind a group of cycling chefs - complete with wine, bread, and cheese. We stopped and gave the chefs about 15 minute to have a clear shot at then finish. We sprinted to the line to the cheering crowds in Spa! What an experience! Tavi and the boys were going to meet us at a designated spot we had picked the day before on the final climb to watch the finishing stage. The cycling club had given us a special pass to watch the race from a VIP area, but, unfortunately, Tavi and the boys could not get back down to Spa because the roads were closed. Liam and I would need to bike back up the Col over the ten miles or so to get back to Tavi and the boys. At this point, the rain was really starting to come down, and we were facing the deadline of the officials closing the course to cyclists as well. We had to sprint up the Col du Rosier for a second time! It was tough, but a lot of fun. Liam loves to bike in the rain! 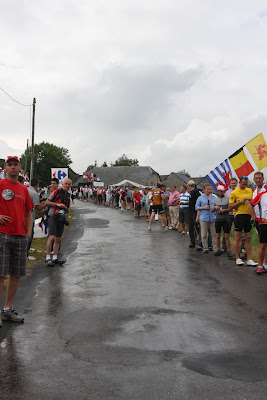 Scene on the road in Belgium

We had chosen a very good spot to watch the race. It even had its own field for parking with a huge tent set up that turned into a Belgian Beer garden! It was the perfect way to get a real taste of Belgium. We really love the country and its people! 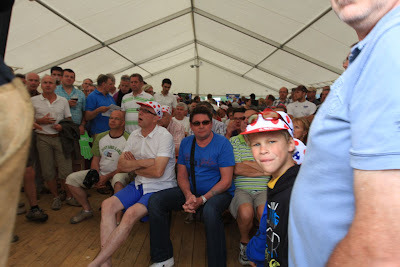 Liam in the beer tent checking on the race progress

We are now off to France. The Tour has a few flat stages before heading into the Alps. We will head back to Switzerland and then catch back up with the Tour in the Mountains!

Bill and Liam
Posted by Bill & Liam Flanagan at 8:49 AM