The Queen of the One-Day Spring Classics - Paris Roubaix 2011

Paris-Roubaix is one of the oldest bike races in France or, for that matter, the world. The spring classic has taken place 109 times since 1896 with gaps only during the two World Wars. In fact, the race's name the "Hell of the North" first came when race organizers wanted to run the race again after the war and the North of France was literally a bombed out living hell. At the time, it was not known if roads from Paris up to Roubaix had even survived the war. The "Hell of the North" is a name that has stuck and is now synonymous with the professional bicycle race. It is truly a grueling, extremely difficult race. Over the years, the battles that have taken place over its punishing course of pavé (cobblestone sections) have become part of cycling legend. Men like Fausto Coppi(winner 1950), Eddie Merckx (three time winner), Bernard Hinault (one time winner, but on arguably the hardest day ever on the course), Sean Kelly, Tom Bonnen, George Hincapie and Fabian Cancellara have all, in part, had their careers defined by their victories and sometimes defeats in April on the road to the velodrome in Roubaix. 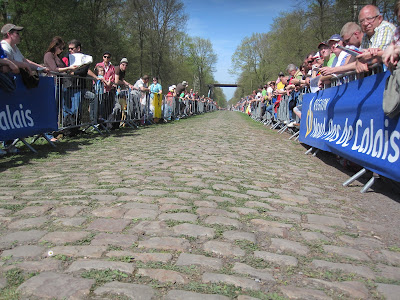 Arenberg section of Pave
With its great history and mystique, Paris-Roubaix was a "must do" on our Father Son Tour spring calendar. In fact, since I first saw the race on television in the 1980's, I have always wanted to come over and witness the "Hell of the North" first hand. As is often the case, you build up a preconceived idea of how the experience is going to go. I always imagined standing in the Arenberg forest under an umbrella in 48 Fahrenheit or 8 celsius weather with a light drizzle. I imagined that the towns in the area would be quite industrial and grimy. I never thought that I would be riding a good portion of the course the day before, and I certainly didn't think I would be calling France my home at the time. Preconceived ideas are meant to be broken and this past weekend certainly blew all mine away. 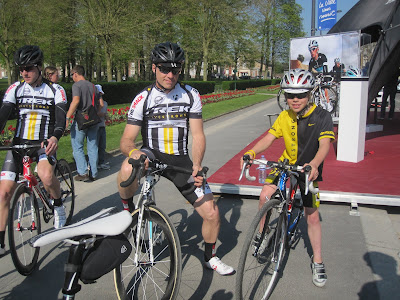 Joe V and Liam getting ready to roll - Pre-Challenge Ride
Back in December, I had signed up to ride the Paris-Roubaix Challenge. The Challenge was to be an amateur event that was over much of the same course as the professional race taking place the day before. This was the first year of the event so it had never been done before. If you want to read more about the crazy thought process that went into signing up for such an event, see February's "A Ride Through Hell" blog post. I knew I was going to be giving the course and the difficult sections of pavé a go. I had also envisioned this to be in inclement weather and muddy conditions. The first indication I had that things were going to be very different than I had imagined was when I saw the weather forecast. All that was on the horizon was sunshine and temperatures in the low 70's F.The second surprise was when we arrived in the town of Saint Quentin which was going to be our base for the "Hell" weekend. This medium sized northern French town turned out to have a really cool feel to it with impressive architecture and a lively plaza. 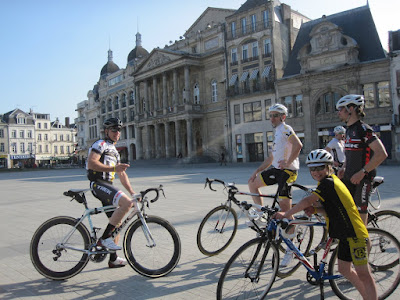 Hanging in the plaza after the Friday ride.
Tavi, the boys, and I arrived in Saint Quentin at three o'clock in the morning on Friday. Although we live in France, Saint Quentin is about 1000k or 600miles from our house. It was a long drive that really reminded me of France in July when we do these crazy kind of things back to back following the Tour de France. The next day at lunch in an outdoor café we ran into Joe V and Liz, some friends that we have come to know from the Tour. Now, it was really starting to feel like July! Joe and some of his friends from Trek were going out on a pre-Challenge spin and invited Liam and me to come along. The hour plus ride took place in the countryside all around Saint Quentin. Leaving the city was a little hectic at 4:30 on a Friday afternoon, but once out in the countryside it was all little villages, canals, windmills, and fields of yellow mustard. At one point, we came into a little village and were not sure about how to cross the canal to get back to Saint Quentin. Two local 9 year old French kids on BMX bikes offered to show us the way, and proceeded to escort us to a bridge which crossed the river--- the international brotherhood of cyclists... I wish I had gotten that on Video.
The next day was warm and sunny as promised. The Paris-Roubaix Challenge started at 7:30 in the morning. It was quite a ride - 86 miles or about 140k with 18 sections of Pavé ranging from 2k to 4k in length. The first 52k was flat, fast and rolling with a few bursts up the hills and through the towns. After the 52k warm-up we started to hit the cobbles. The sections were like going through rounds of a boxing match. In the first section, two guys I was riding with immediately went down hard. One, as it turns out, broke his wrist, but in a testament to how tough he is, he incredibly rode the rest of the sections and finished the race. Riding the cobbles is an incredibly jarring, almost indescribable experience. The race hurt, but it was also really fun and satisfying to finish. 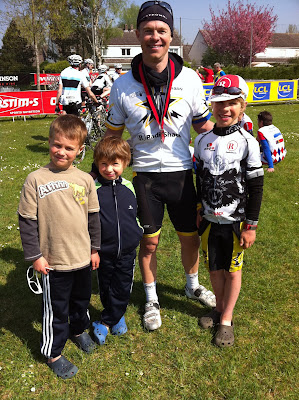 At the finish of the Challenge
After the race we headed back to Saint Quentin and did something that was -- well, totally French. We spent the afternoon and good part of the evening eating and drinking with friends in an outdoor café. After all, we needed to replace the 5000 calories we had lost along the road to Roubaix. We had a really good time. 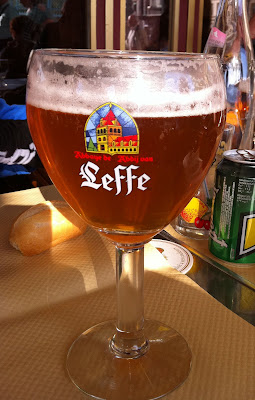 Ahhh. The Café life.
Sunday was race day and again the weather was warm and sunny with very little wind. The riders would be dealing with dust instead of mud. George Hincapie, a professional rider who has done the race something like 16 times, said that this was the first time that he had ever had to put on sunscreen for the event. 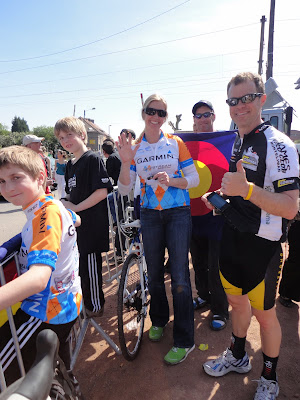 Watching the race with new friends from Colorado.
We headed out to the forest of Arenberg to watch the event. Arenberg is a 2 and 1/2k straight section of cobbles through forest that is extremely fast and dramatic. Here we met up with another American family from Colorado that had come over especially for the event. The family were huge Garmin fans. It was a lot of fun taking the whole scene in. At the entrance to the Arenberg section, the town had set up a huge TV screen. We were able to see all the action as the race approached the forest. As soon as the race came through, the cobbles cleared out. We had the choice of continuing to the velodrome in Roubaix or doing some riding on the famous cobble section. It was a tough call, but in the end Liam really wanted to get some riding in. We hit the pavé so that Liam could get a true taste of the"Hell of the North" I made sure that we were back to Arenberg in time to see the final 15k of the race and watch the finish on the big screen in the middle of a carnival of cycling in a little French village in the North of France. It was really the perfect sunny weekend in the not so "Hell of the North."
Stay tuned. Next week we will be reporting from Girona.
Livestrong, Train Safe, and Live Well!!! 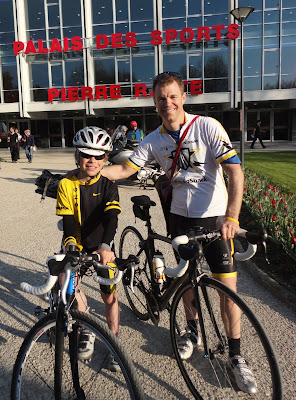 This is Bill and Liam signing out!
Posted by Bill & Liam Flanagan at 9:33 AM 1 comment: