Preparations for the Tour - the Glamorous and Not-So-Glamarous 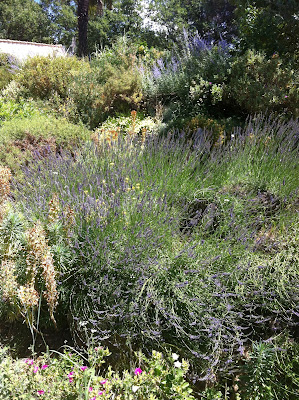 I don't have to look at the calendar to know that summer has arrived here in Provence.  I can literally feel, smell, hear and taste it.  As soon as I step out the door, I'm hit by a wave of heat that arrives early and stays well into the sunlit evenings.  The purply, deep, at the same time uplifting and calming scent of newly sprouted lavender fills the nose and resonates with the soul.  The whirring, drilling, chirping sound of cicadas comes and goes in waves in scattered pockets of trees throughout the countryside. The tangy, fresh taste of local fruit and rosé wine are back on the palate.  It seems that the whole body starts to relax and soak in this omni-present feast for the senses. This will be our fourth summer spent in France, third since moving here.  It is June.  The windows and shutters of the house have been opened, we have started to eat outside, afternoons are filled with the sounds of the boys and their friends playing in the pool.  The garden is in "full-on" mode with the scent of the fresh herbs of Provence, peaches and plums are on the trees, and everything is green and colorful.


June is also a big month for bike racing for the boys, and it is the time of year that we start preparing for July, more specifically - Le Tour de France.  Some of our preparation is glamorous (trips to the Côte d'Azur and the Alps to ride and train on mythic climbs), some is not-so-glamorous (weekends spent in hot industrial parks racing criteriums).  It is all, however, done in the name of a sport that we love (cycling).  Last weekend we had the the "not-so-glamorous" GP Les Estroublans which was the last race in the Trophée de Les Bouches du Rhone championships.  The series was made up of 10 races - 3 cyclocross, 3 piste and 4 route (road) races.  Liam ended up second overall (Vice Champion).  It was a great result, representing a lot of hard work over the last few months.  To celebrate we turned to the "glamorous" with two days of ocean swimming, running and cycling in the Cote d'Azur near Nice and Monaco. 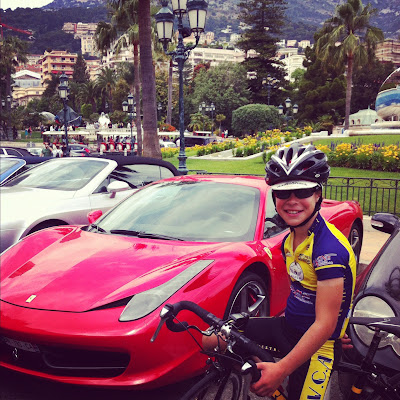 When you first hit the Côte d'Azur the first thing you notice is a lot of bling.  It is pretty much the opposite of the little village we live in.  I have to say that I prefer down-to-earth Auriol, but it is fun to check out the flashy lifestyle now and again.  Once you are out of the cities, the biking in the coastal mountains all around Nice and Monaco is truly epic.  Our two days of Father Son Tour training ended up being just that -- epic.  Day one we had a out and back run along the Promenade des Anglais followed by a mile open water swim in the Mediterranean, followed by a 20 mile evening bike ride over part of the Ironman France bike course.  Day two was legendary - for lack of a better word.  We started out on our bikes from Nice and headed up and over the Col d'Eze, then dropped down through Turbie and Cap d'Ail and then into Monaco.  Once in Monaco we pulled up on our bikes to the Monte Carlo Casino and the Hotel de Paris.  Liam is at the age that he is starting to appreciate sports cars.  Here in front of the Casino was parked a stable of Lamborghinis, Ferraris, Aston Martins, Maseratis, Porsches and Bentleys.  We were checking out the cars when a casino concierge walked up to us.  I thought he was going to tell us to move on, but instead he came over to talk about bikes.  He said that he had the same bike that I have, a Trek Madone, and then proceeded to point up at the Col de la Madone, towering nearly 4000 ft above Monaco.  I knew immediately how we would be getting back to Nice.  Through conversations with the concierge, we found out that if you ride out of Monaco towards the Italian border you can climb the Col de la Madone from the town of Menton and return to Nice the back way over the mountains.  The challenge was set.

The Col de la Madone climb starts out at sea level on a very steep little road called Corniche des Serres de la Madone.  As you weave your way up through the many switchbacks, the views down to the coast below are breathtaking . . . or perhaps it was the 11% grade that was taking my breath away.   After about 7k you come upon a beautiful cliff-perched village called Sainte Agnes.  It is here that the road splits into three directions and there is a fountain of fresh mountain spring water just inside the forest. While filling up our bottles and drinking at the fountain we met an older lady who had - well - a saintly presence.  We spoke to her in French about the town and the peace and tranquility of the surrounding area. While talking, this petite gray-haired rather fit woman seemed to radiate the calm and tranquility of which she spoke..   We pulled out of Sainte Agnes after meeting "Sainte Agnes incarnate" with an almost surreal feeling. 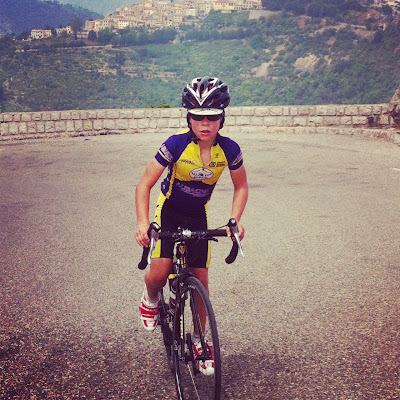 From Sainte Agnes, it is another 5k to the summit of the Madone.  This part of the climb is made up of long straight sections that go up, up and  (you guessed it) up some more.  The top is not so obvious, and, unfortunately, the sign that marks the top has been stolen.  For Liam and me, it was a very special milestone along our Father Son journey.

We dedicated the ride and the climb to a person that is going through a rough patch at the moment.  An athlete and cancer survivor who has been an inspiration to many.  Someone, who, in 2009, took the time to ride over an Alpine pass with a father and his then 8-year old son and give them inspiration to turn dreams into reality and courage to make a positive difference in the world.  We dedicated the day's epic ride to Lance Armstrong.

In one week's time we will be up in Liege for the Grand Depart of the Tour de France.  It will be our fourth Tour in a row.  It is a journey that has - and continues to - challenge, unite and strengthen us both as father and son and as citizens of this incredible planet on which we live.

Posted by Bill & Liam Flanagan at 1:59 PM No comments: