Back to the Alps for Fireworks on a Mountain

Each year that we follow the Tour de France it seems that one particular location becomes a sort of hub, and comes to symbolize our experience for that year. In 2009, the center of our Tour universe was the lake front town of Annecy in the Haute Savoire. For the 2010 Tour, the mountain town of Morzine became the central link that seemed to connect all of our experiences of that year. This year I can pinpoint the exact location of the nucleus of our Tour - The Casino Supermarket parking lot in the town of Bourg d'Oisans. I know what you are thinking - "what is he talking about?" Well, I will explain. You see the Casino Supermarket happens to be located at the base of L'Alpe d'Huez. It is actually quite a nice spot, as supermarket parking lots go. There is some grass and shady trees for a picnic around the edges and plenty of ample parking all around. I have been in that parking lot over the last two and a half weeks no less that six times. The first was for Liam and my climb of the Alpe from the blog post "21 switchbacks." We also came back down to this spot after that climb, and reflected on our great feat of that day with a celebratory baguette. The third time was not actually in the parking lot, but near it as I was getting ready to push up the Alpe d' Huez during the Etape de Tour. Tavi and the boys got stuck behind road closures and actually waited for me to come off the mountain after the race in said parking lot. I descended down and we all had another celebratory baguette in a cool shady grassy section of the lot. This past week when Liam and I went back up for Stage 19 of the Tour, which was the exact same course as the Etape had been, we knew where to go to make as our base camp for the day's adventure. Amazingly, in a sea humanity, on race day, we were able to find parking at the Casino. After a day of experiencing the carnival of the Tour and the fireworks on the mountain we came back down to our hub in anticipation of heading off to Grenoble for the following day's time trial. Here things did not go as planned, and we ended up being stuck for about 6 hours until the traffic started moving. While we waited Liam (always eager for a race) set up a Casino parking lot circuit and raced his bike with some local French kids for hours. That was a lot of fun to watch! 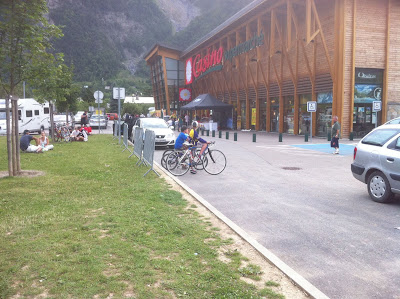 The days race was amazing! Liam got his second ride up Alpe d'Huez in as many weeks (it was the third time for me.) As usual, Liam was drilling it. We made it up to about 3 k from the summit, and then turned around and descended back down to Switchback #9 to watch the caravan and race come through. I think that we captured the race pretty well in the video. The French were out in full force to watch Thomas Voekler. Although Voekler lost his yellow jersey to Andy Schleck this day, his 10 or so days in yellow seems to have reignited the French national passion for the Tour de France. A young Frenchman and team mate of Voekler's named Pierre Roland won the stage and in the process took the white young riders jersey of the Tour. It can safely be said that the future looks bright for French cycling. 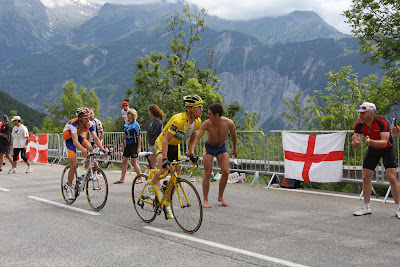 Thomas Voekler captured the imagination and admiration of France 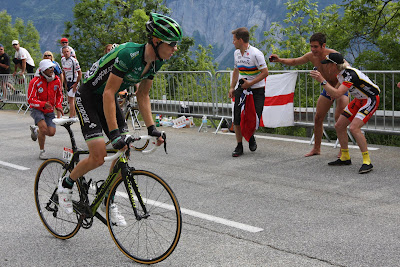 Frenchman Pierre Rolland- Winner of the stage and white jersey

As expected, the 21 switchbacks of Alpe d'Huez were pivotal in the outcome of this year's Tour de France. The stage set up a showdown between the Australian Cadel Evans and Luxemburg's Andy Schleck for the following day's time trial. The 2011 Tour would be exciting right down to the wire. It was a big party on the mountain and, as always, thrilling for Liam and I to be there so close to the action. 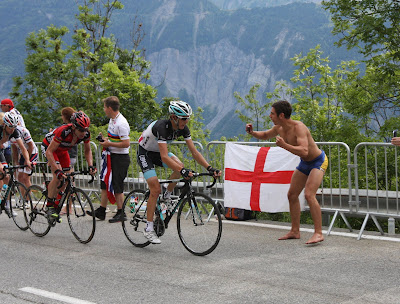 Cadel and Andy in battle 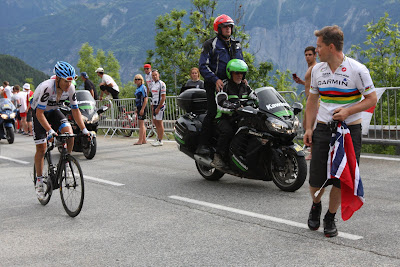 For us the journey from the Alpe to Paris would be by way of Provence in order to pick up a huge surprise for our annual Sunday ride down by the Seine on the last day of the Tour, but I will leave that for another post coming soon! 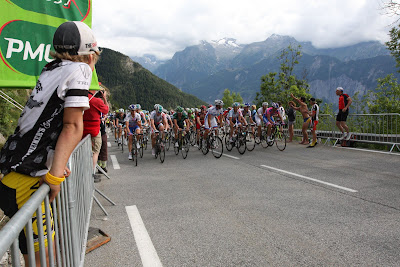 Liam's front seat to the action 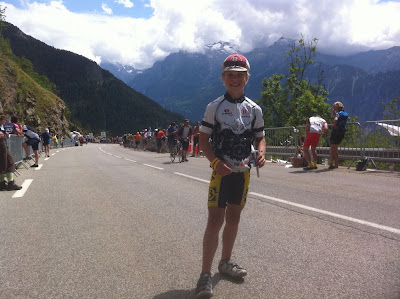 Always happy in the mountains

This is Bill and Liam signing out!
Posted by Bill & Liam Flanagan at 6:27 AM