Kicking Cancer to the Curb in Austin, Texas

Two Weeks ago Liam and I decided to jump into the Livestrong Challenge in Austin, Texas. The Texas weekend was a perfect way to end our very exciting cycling season for 2009. The Challenge is a fund raising event for the Lance Armstrong Foundation. There are four such events across the country each year. This year the Austin event alone was able to raise more than 4 million dollars for the fight against cancer. Liam was able to raise $1600 in a short period of time thanks to the generosity of his sponsors. Thanks everyone!

The weekend consists of a 5k on Saturday and a bike ride on Sunday. It is a great way to raise money for a really important cause, and to have a great time in the process. I have always been inspired and motivated by the attitude and mindset of the Livestrong community. Cancer survivors, care givers, and support teams are fighters. They are a group of motivated, purpose-driven individuals. It is inspiring to be in the same room with these people, and even better to run a 5k and ride a bike with them! 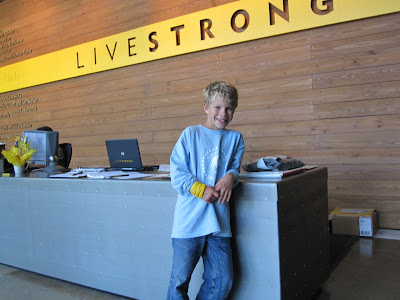 It was the first trip to Austin, Texas for both Liam and I. Austin is a hip town with a vibrant music scene, great restaurants, beautiful surrounding rivers and lakes, and a thriving university and economy. We arrived late afternoon on Friday and our first stop was the Livestrong Foundation headquarters. Here we met Greg Lee who gave us a great tour of the building. Next stop was the Livestrong Village at the Austin Convention Center for packet pick up. After checking out the expo, we rushed over to the center of town to get to Mellow Johnny’s. We got there 5 minutes before they closed. The store had had a record day and everyone was ready to celebrate. Lance Armstrong’s creation in Austin is everything a bike shop should be. As a cyclist you can find just about anything you ever wanted at Mellow Johnny’s including the best bikes, fitting rooms, mechanics, café, great friendly staff, and some pretty cool art work as well! 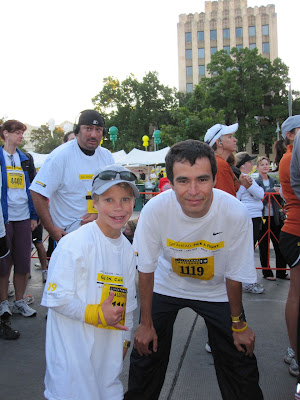 Saturday morning we met up with, Enoc Ishida and his family. Enoc lives in Dallas and joined our team by finding us on Twitter @fathersontour. It was a lot of fun to meet his son and wife and run with him during the 5k. He even helped shoot some video! After the run we met up with our fund raising mentor Steve Bartolucci and several members of the Cyclists Combating Cancer team. Liam had a blast meeting Spencer Sartin. Spencer is Liam’s age, is an awesome cyclist, and cancer survivor. Later that night Team CCC invited us to attend the appreciation dinner and there Liam and I met Max Owens, who is also Liam’s age. Max lost his dad to cancer earlier this year. The experience of that dinner and the individuals we met there will be with us for a lifetime!

Sunday morning we headed out to Dripping Springs for the Ride for the Roses. Liam and I rode the 65 mile course. It was a tough, windy day. Liam was having some allergy challenges at the beginning of the ride but managed to push through after the first fifteen miles. I was very proud of him! Out on the course someone said that I was lucky to have a son who shared my love and passion for cycling. I have to agree. I’m a lucky man and father! 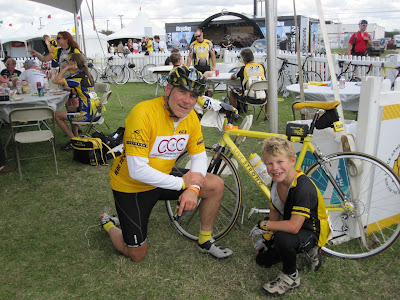 Out on the course, we met some great people and were able to get a first hand taste of Texas hospitality. The aid stations were a blast, and Mellow Johnny’s power stop was quite a party! Liam finished the 65 mile ride with a 14.2 MPH rolling average. His strength and endurance never ceases to amaze me. By the time we finished we had the satisfaction of knowing we had met our athletic challenge while helping to support the fight against cancer. 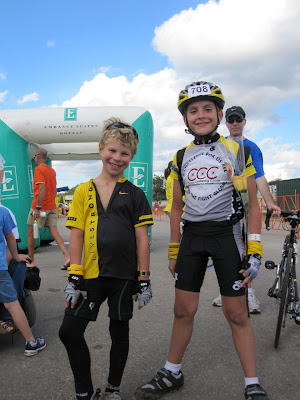 Liam and Spencer Sartin at the Finish

On October 24th and 25th, my dad and I are going to Austin, Texas to participate in the Livestrong challenge. On Saturday, I will run a 5K and on Sunday I will bike a challenging 65 mile route in the Texas hill country. It is a tough event for someone my age, but I have done a lot of training and similar rides and I am excited about the challenge. The event will raise money for the Lance Armstrong Foundation. It is a cause that is very close to my heart. I want to live in a world where people don't die from cancer.

Please join me in the fight against cancer!

Thank you everyone! Together we can and do make a difference!

Liam and I just got back from a weekend that, for no better words, is best described as awesome and inpiring. We knew that when we signed up for Levi Leipheimer's Granfondo in Santa Rosa, California that we would be in for a treat, but we had no idea how great it would be!

Our First surprise came when the folks at Road ID (the main sponsor of the race) offered all the participants in the event a free Road ID. Liam and I thought it would be fun to send them a tweet on Twitter to thank them for the wrist bands. The next morning we got a reply that they were setting up a pre-event ride on Livestrong day in Santa Rosa, and they invited us to come along. It was a really cool pre-race spin out to Sebastopol and back on what turned out to be a beautiful day in Sonoma County. The group consisted of about fifteen riders which included some of the Leipheimer clan, Scott Nydam from Team BMC, P.J. Rabice and Edward Wimmer from Road ID, and a few other fellow participants from the Fondo. 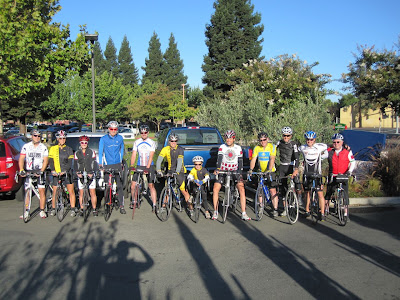 Liam recorded a special video for Lance Armstrong before the ride. He congratulated Lance for his thirteenth anniversary from his diagnosis of cancer, said he hoped that someday soon we will discover the cure for cancer, and hoped that all people now living with cancer would be able to survive it. I thought it was very thoughtful and well said.

At the Granfondo registration later that day, we picked up our packets for the race and met many of the volunteers and fellow race participants. It is here that we began to feel that there was something special about this event. There was a real since of community at the packet pickup. It was almost like a family reunion of 3,500 participants and over 600 volunteers who made the event possible. 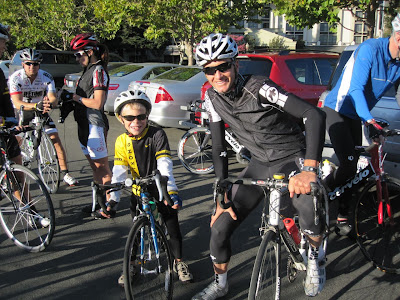 Liam and Scott Nydam (The winner of the event)

The race idea had come from Levi Leipheimer. He got together with a few of his friends and some great sponsors and decided to do something positive for his community. So often these days we hear so much negative about the state of the economy, and one is often left with the since that we are helpless to sit back and watch as things we care about crumble around us. Levi decided to be proactive and do something about it. Maybe it is because he is a cyclist. Out on the bike you have to move forward. You can't dwell on the negative. Cycling is about positive movement into the future. Levi was the driving force and inspiration behind an idea which would turn into the largest organized amateur cycling event in this country - an event that would raise much needed funds to both enable Santa Rosa to continue to be a host city for a stage of the Tour of California and to fund the very important work of the Forget Me Not Farm, a not for profit organization which puts orphaned animals and children together to break the cycle of violence that many are trapped in.

The event itself was amazing - from the feeling at the start, to the ambience of the crowd along the streets, to the the beautiful rolling vinyards outside of town, to the majestic Pacific coast, to the awesome views from the top of Coleman Valley Hill, to the great spirit of the many volunteers, to the new friends we met on the course, to meeting Levi at the finish. I could go on and on. Liam and I were honored to be part of such a great event. I hope that our video captures just a portion of the magic we felt out there that day. 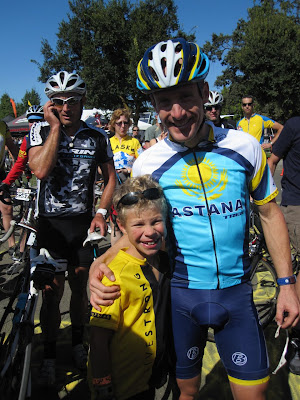 Liam and Levi at the Finish

By being positive and doing what we enjoy we can make a difference in the world! Thanks Levi and to all the folks that made this possible.

This is Bill and Liam signing out!