It’s hard to believe that 6 years have past since Liam and I first began our FST adventure.  Back then; Liam was an 8 year old who loved to ride his bike.  All he talked about in those days were the mountains of France. We decided to take a leap that summer, and spend 4 weeks in Europe following the Tour de France and climbing some of those bad-boy, mountain passes.  It was so much fun, that the following year in 2010, we decided to take a sabbatical and spend 12 months in Europe. Liam continued to cultivate his passion for cycling and we began to really enjoy life in the South of France.  As it came time to think about heading back to the states, each year we decided to extend our stay. One year turned into two, which turned into three, which turned into five, and, over time, we have come to call France our home.

Now six years later not much has changed in one respect -- Liam still loves to ride his bike and he is often talking about climbing in the mountains in France! Each year, just as in 2009, we take time to do a bit of riding and training around the Tour de France.  For the 2015 Tour, we were going to hit the stages of the last week of the race as it passed through the Alps, but the plan changed when we received an invitation from our friend Jose Been to stay with her and her husband in Utrecht, Netherlands.  Like in 2010 the Tour de France was starting in Holland. What an awesome surprise to have such great hosts in the host city!

We flew from Marseille to Charleroi, Belgium Thursday, which was the same day as the Tour Team presentation.  On arrival, we rented a car and made the 2-hour drive to Utrecht just in time to catch the Last teams being presented by Jose Been who has now become the lead cycling commentator for Dutch Eurosport!  We first met Jose 5 years ago in Assen, Netherlands at the European Youth Tour.  She was a journalist and wanted to become a cycling sports commentator -- not an easy goal for a woman in Holland.  She followed her dream and succeeded. It is a great story, and one that serves as a role model and inspiration for future generations to follow their dreams.

Utrecht is a wonderful university city with beautiful canals and rivers lined with cafes.  It played a perfect host to the Tour start.  It was unusually hot. Temperatures were nearly 100 degrees as a heat wave was blasting Northern Europe. On the Friday before the race start, Jose braved the heat with us and was our guide for a 5-hour cycling spin all around the area.  We rode out into the Dutch countryside and shared a refreshing lunch at a local farm while we watched several Pro-tour teams roll by in last minute preparations for the next day’s time trial, first stage of the Tour de France.

The next day Liam and I did another early ride and then headed into town to watch the time trial.  There were literally millions of spectators braving the heat to line the roads.  The Tour creates this massive street festival; it is as much a celebration of the human spirit as it is a celebration of the biggest bike race in the world.  In the evening after the time trial, once the temperatures started to cool, the town erupted into a massive street party.  There were bands in all the squares and the mood was definitely festive!

On Sunday, Liam and I took off for the French speaking part of Belgium.  Our goal was to pick up the pace and intensity of Liam’s training as he prepares for the European Youth Tour at the end of July.  We picked an 80k hilly section of stage 3 of the Tour de France.  This section included the famous Mur de Huy. The Mur is an almost 2k section of road that has an average uphill gradient of 19%.  It is tough.  We stayed in the area overnight and the next day, which was the day of stage 3, biked the same route again and watched the Tour come through on the climb just before the Mur.  The only bad news of the day was that the race had had a terrible crash in a section 60k before finish. Liam and I had ridden this same section just a few hours before. It was an extremely fast flat section with a slight tail wind.  Liam and I were easily hitting speeds in this section of over 50k an hour.  I can only imagine what speed the Pro peloton was doing when the crash occurred. Fabian Cancellara who was in the yellow jersey was involved and had a terrible fall.  We saw him pass by in later in the race in obvious pain, and it would turn out that he had fractured several vertebrae in his back, and would not start the following day.  We had spent the better part of a day with Fabian last year at the Trek team Launch.  He is a super nice guy with a lot of class, and it comes across with the way he races his bike.  His early exit was a real loss for this year’s Tour.  We wish him a swift and full recovery.

We parted ways with the “big show” to spend the last three days of our Tour de France “training camp” just outside Geraardsbergen at the Hakuna Matata B&B.  Hakuna Matata is a family B&B, ideally located in the heart of the Flemish Ardennes, run by Franky Poelaert. It is a perfect spot for a Belgian biking vacation or as a base for some really intense training on the Tour de Flanders circuit.  Liam and I got in three days of spectacular riding.  We spent a lot of time on punchy cobble climbs, which helps to build real power in the legs. Our favorite was the Mur de Geraardsbergen; which, up until a few years ago, was the centerpiece climb of the Ronde Van Vlaanderen. The climb starts at the foot of the medieval city and heads up through cobbled streets to end at a chapel on the hill high above the city.  It is a classic Flemish climb that we hope to see included back in the Ronde one day.  At the end of three days, Franky gave us a great surprise (well only me because Liam is not old enough to brink Beer.) I received a cool introduction to authentic Trappist Beer made by Belgian monks!  What is a better way to end a week of cycling in Holland and Belgium than with a beer tasting?!


After our week of cycling we headed back to Charleroi and jumped on a plane for the quick flight back to Marseille.  The advantage of living in Europe is that everything over here is pretty much within a quick hour-and-a-half flight!  Just before arrival we spotted Mont Ventoux out of the left window of the plane.  The white-topped mountain standing high above Provence is a familiar guiding beacon always welcoming us home from our adventures au-delà.

This is Bill and Liam signing out.
Posted by Bill & Liam Flanagan at 4:45 AM 1 comment: 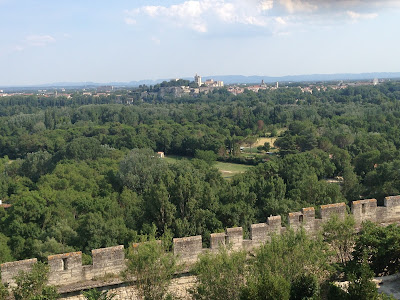 Provence is a region in Southern France that subtly draws you in.  The region is perhaps best know for its hilltop villages, lavender and Sunflower fields, clear blue skies, and constantly changing exuberant light.  It has a varied landscape that is at the same time – simple and multi-faceted.  Against this vivid backdrop, the people who call Provence home form a rich cultural tapestry that never ceases to amaze, inspire and delight.

Drawing on this inspiration, fellow Expat Ken Wallace and I have embarked on a new video series project called “Lost in Provence.” We like to grab a camera, turn off the GPS, and wander down the back roads of this wonderful place we now call home. We call it getting “lost”, but it is actually the first step in discovery.  It is a project of telling stories – stories of the most interesting people and places you have probably never heard of.

If you have a little time, pull up a chair and check out the site.  It’s our answer to a fast paced chaotic world. Slow down, unplug, and don’t be afraid to turn down a side street every once in awhile.  You never know what amazing people and places you’ll find just around the corner!
www.lostinprovence.com

Posted by Bill & Liam Flanagan at 2:37 PM No comments: