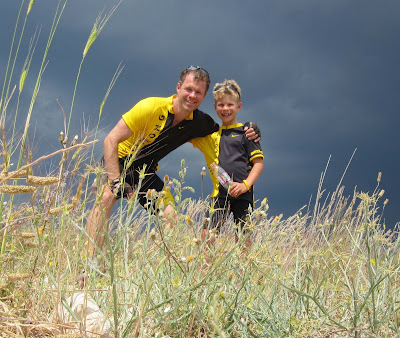 The Lavender Fields of Provence 2009

Liam and I experienced many profoundly transformative events out on the roads of France and here at home last year. The universe has some pretty amazing lessons for a father and son pedaling their bikes out on the open road. When I first started this blog, I did so primarily as a way to keep a journal of what I thought, at the time, would be a one time trip to France. Little did I know that FatherSonTour would soon take on a life of its own. If you have been following the blog, you know that Liam and I had some experiences last year that impacted our lives in some very deep and moving ways. From the people we met along the journey -- to the lessons learned out on the road -- we finished 2009 as a father and son transformed.

Our transformation came on slowly, one mile -- one challenge at a time. When we began the journey last year, I thought that the experience of following the Tour de France would really impact Liam, who was 8 years old at the time. Little did I know that I would be equally changed by the experience! We met world class athletes at the top of their game, as we dove right into the heart of the ultimate endurance event in sport. We met fellow recreational riders out to conquer their own Mt. Everest (or Mont Ventoux as the case may have been.) We met people engaged in internal battles, many fighting cancer. Cancer survivors are warriors. They experience first hand the silent tremors of a global earthquake that threatens to be the number one killer on the planet. In many ways we are all engaged in this fight whether we know it or not. We channeled that experience into more adventures at home and were able to do our little part in the battle against cancer.
Not all of the people we met last year are still with us today. Some lost their battles, and others continue to fight the battle of (and for) their lives. That is a lot for a 9 year old (or even a 41 year old.) The spirit with which these warriors approached life, however, lives on in all that they came into contact with. Lesson: never take a day for granted, never give up, and that what you can do today don't put off until tomorrow, and, most importantly, through it all you have got to have fun and stay positive. Liam and I are committed to making a difference.

Along the way, our father/son relationship transformed. Our bonds grew stronger and our relationship became closer. Liam is a very strong minded young man, and a lot of times he doesn't want people telling him what to do (including his father.) Therein lies the challenge. How as a father do you parent without being over bearing? How do you nurture an alpha dog? I don't know that I have the answers, but I do know this--it takes lots and lots of patience. There were times out on the road when Liam had had enough. There were other times that I had to slow him down. At times, I struggled with the balance of conveying a healthy respect for risk and not at the same time instilling a paralyzing fear. Liam and I have become good friends, but often he needs me to be his dad. Unfortunately, the two roles can often be at odds. It can be difficult at times, but the relationship I have with all my sons (Liam has two younger brothers) I would not trade for all the world!

What's in store for 2010?
This year we will be documenting a lot more of our training and preparation on the blog. Liam will be swimming throughout the spring. Swimming is an excellent sport for balanced bilateral, athletic development. The aquatic sport also gives him a great cardiovascular base. Mondays he is on the bike up at the ADT Velodrome. The track is a great way to further develop bike handling skills. On the weekends he has swim practice on Saturday mornings and Sundays are set aside as our long ride (40-60 miles).

My challenge will be keeping up my Acupuncture practice, staying in shape to keep up with an ever faster Liam, improving my French (I have enrolled in a class at the local junior college Alors, Voila!), be a good dad and husband, and finally improve the blog which I hope that other families will find useful as they take on new adventures or chose to adopt a new active lifestyle.

Tour of California - May 2010.. We will ride and follow several portions of the Tour

Livestrong Challenge Seattle June 2010.. We will be riding this challenge the day before leaving for Europe for the Tour De France and Liam's ride from Paris to Rotterdam

Liam's Livestrong Challenge Ride - Paris to Rotterdam- June 25th to July 1st 2010 Paris to Rotterdam 300 miles or so. We will be combining this event with our Livestrong Challenge Austin Campaign. Our goal is to raise $10,000 for the Lance Armstrong Foundation through the ride. We have some great gifts that are possible for the people who help Liam towards this goal. Stay tuned....

Le Tour de France - July 3rd to July 25th.. we will once again follow the Tour and revel in the adventure along the roads of France.

Tour d'Organics- Sebastopol- August 2010..This will be the third year in a row for this great
event.

Livestrong Challenge Austin, TX October 2010.. We will end our season again in 2010 at this great event! What stories of courage and what spirit out on the roads at this Texas weekend!
Liam and I hope that you can join us on our journey, out on the road or on the Internet! Together we can and do make a difference!
Live strong, Train safe, and Live well!
Bill and Liam

Posted by Bill & Liam Flanagan at 8:55 AM No comments: