Liam is riding 400+ miles from Switzerland to Rotterdam for the start of the 2010 Tour de France in support of the Lance Armstrong Foundation. Join us to make a difference today! Get a chance to be eligable for cool prizes for every $5 donated! If we raise at least $3000 will give away a copy of the great book Comeback 2.0 signed by both Lance Armstrong and Elizabeth Kreutz!

Liam and I kicked off our 2010 season of cycling and Tour chasing, this week, with the Amgen Tour of California (ATOC). This year, in its fourth running, the eight-day pro-cycling stage race was moved from January to May. Not only is the weather better in California in May, but also because it comes later in the year the riders are in top form for the event. Each year the event gets bigger and better! It is truly starting to rival European grand tours like the Tour de France and the Giro di Italia.

Amgen is the title sponsor of the bike race. This is an excellent partnership as Amgen, based in Thousand Oaks, California and its scientists are working very hard to find and improve drugs and new methods to beat cancer. The sport of cycling has come to be somewhat of a metaphor for the fight against cancer. Of course, there is the Lance Armstrong story, which makes the obvious cycling/cancer link. Lance's incredible story continues to inspire and motivate almost everyone that hears it. Now, however, the bond between cycling and the cancer warrior community has moved beyond Lance Armstrong. There are thousands of other stories emerging and these small individual, personal victories give us hope in this war. One turn of the pedals, one mile at a time we are gaining ground on this disease. Here is the thing about cycling-- it doesn't matter if you go 5 miles or 105 miles as long as you are getting on the bike you are still a cyclist. Cyclists move forward, they are self-starters; they are proactive not only about their sport, but also about their communities and the health of their communities. It is partnerships like the one between Amgen and the cycling community that move us forward as a species to find better ways to treat and ultimately to find a cure for cancer. Maybe you can tell --three days at the Amgen Tour of California left Liam and I inspired! 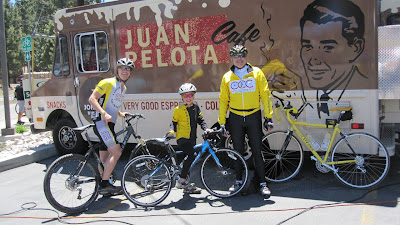 Now for the race report -- We joined up with the ATOC on Friday up at Big Bear Lake. Big Bear Lake is about a two-hour drive from Newport Beach. The lake sits up in the mountains at about 7000 ft. The air is clear and crisp and the area and lake are beautiful. In the winter I am told that there is excellent skiing. We met Steve Bartolucci (our friend, ten year cancer survivor, Livestrong mentor, leader of Sunday's Breakaway from Cancer Walk, and avid cyclist) up in Big Bear on Friday morning. We could not have asked for a more beautiful day! The road around the lake is approximately 20 miles. We were all ready to ride with Liam leading the charge. Coming from sea level you can feel the altitude, however, Liam didn't seem to notice. We had a fantastic ride around the lake. As we headed up to the finish area of the stage we saw the Mellow Johnny's tent and Juan Pelota Cafe coffee truck all the way from Austin, Texas. For those of you that saw our blog from the Livestrong Challenge - Austin you know that Mellow Johnny's is a bike shop and Juan Pelota Cafe is inside the bike shop. This store is Lance Armstrong's creation and it has a really cool vibe. Katie and the Mellow Johnny's crew definitely brought this with them to California.

After hanging out for a few with the crew from Texas, we got back on the bikes and headed up the final climb to the finish line which was at the base of Snow Summit. It was a fairly steep hill with a good head wind coming off the mountain. It is always an awesome feeling riding through the finish shoot of a Tour stage. The crowd cheers you on and for just a moment you feel like you are in the actual Tour. Liam of course hits the hill and is gone! Superman! 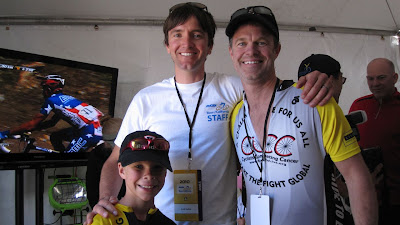 Steve Bartolucci had an extra pass for the Amgen VIP viewing area, which was right on the finish line. We had a front row seat to the biggest show in the state. While we waited for the race to make its way over the 135 mile route from Palmdale ( It was a very difficult stage), we walked around the exhibitor area. We hung out with the folks from Trek Bikes. They had an awesome tent and, of course, awesome bikes. Next door was Radio Shack which we was cool and had some cool gadgets! Old friends started to turn up. We saw P.J. Rabice and Edward Wimmer from Road ID. They offered to take us over to the versus TV tent to meet Bob (Bobke) Roll. We also bumped into professional cyclist and Sebastopol resident Scott Nydam. All familiar faces if you read the Levi's Granfondo blog entry in October. It is a great group of people, and they have always made Liam and I feel right at home! 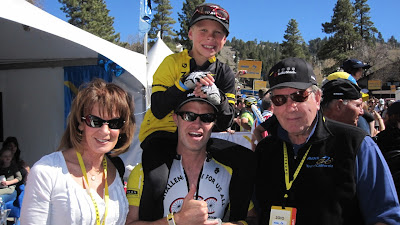 While we were watching the race we had the privilege of meeting Levi Leipheimer's parents Bob and Yvonne Leipheimer. They were great with Liam and they treated Liam as if he were family. As they say, "the fruit doesn't fall far from the tree". Levi has some fantastic parents, it is no wonder he is such a nice guy! The race did not disappoint with fire works and attacks to the end.

Saturday we headed into Los Angeles for the time trial. We once again had access to the Amgen VIP tent. We ran into Jeff and Jo-Ann from the Pablove Foundation and were happy to hear that Jeff is planning another cross country ride in October. Liam and I followed Jeff's cross country journey last fall and rode the final leg of the cross country ride. We also met up with Matthew who is 10 years old and also rides with Liam at the Velodrome in Carson. Liam and Matthew who are two cycling fanatics had a blast. We also ran into Steven Elliott and his family who we had met last summer on the train from Nice to Monaco on our way to the opening stage of the Tour de France. Steven is an Amgen scientist, becoming an avid cyclist, and a really nice guy. In fact, everyone that I met from Amgen and AEG (the company that owns the race) were super friendly. What great companies! 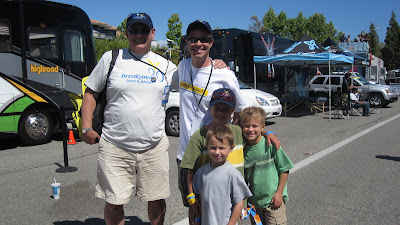 Sunday, for the finale, we (the whole Flanagan clan) headed up to Thousand Oaks and West Lake Village for the final stage of the ATOC and the Amgen Breakaway from cancer walk. Breakaway From Cancer is a national initiative founded by Amgen in 2005 to increase awareness of the important resources available to people affected by Cancer and survivor ship. Steve Bartolucci was chosen to lead this walk, and to also present the most courageous rider jersey for the day's stage. He was clearly the man for the job! The walk was about 200 strong! Here we also met Joe Miletich who is Amgen's VP of Global research. Although I only spoke with Joe briefly, I could tell right away that he had an enormous amount of passion and enthusiasm for his work. 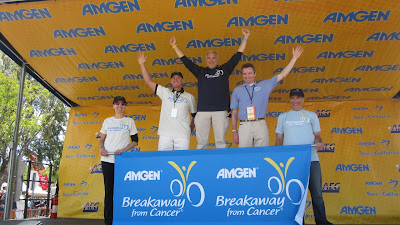 Scientists and Survivors band together to beat cancer

The actor Patrick Dempsey joined us for the for the walk across the Finish line . We made a lot of noise and the walk itself was a powerful symbol of the spirit and mission of the Breakaway from Cancer initiative. Steve Bartolucci gave a very heart felt and motivating speech after the walk.

The bike race did not disappoint. The crowds were enormous, and the energy of the race had Westlake village pumping! It really did feel like we were at a stage of the Tour de France!

Next week we leave for Europe! We are actually moving to Europe for at least a year. We will come back for both Levi's Granfondo and the Livestrong Challenge - Austin. Our FatherSonTour and ride will be dedicated to two charities as Liam and I ride across Europe to the start of the 2010 Tour de France. At age nine Liam will be riding several hundred miles in the hopes of raising money for both the Lance Armstrong Foundation and the Forget Me not Farm. We will put up more information about this adventure up on the blog in a week or so. Lots to do between now and then!

Bill and Liam signing out!
Posted by Bill & Liam Flanagan at 11:32 PM 1 comment: