Stage 15 - Verbier - Sites and Sounds of the Swiss Mountain 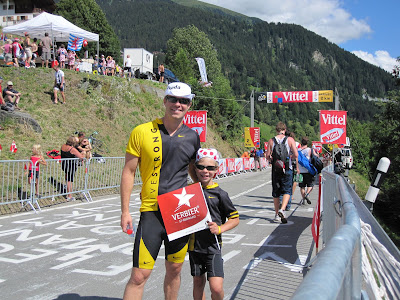 There is one week left until the Tour de France finishes in Paris on July 26th, and Liam and I are back in the step with the race. As it turns out, we picked a great stage to hook back up with the Tour. Stage 15 marked the start of several stages in the Alps. It is amazing how things play out in a three week bike race. The race had gone through 14 stages, and more than 1000 miles, with not much of a change in the overall classification. Today, however, the last 5 kilometers of stage 15 on the slopes of the mountain finish in Verbier, Switzerland changed the entire race. On the last climb of the day, which was actually about 10 kilometers, Alberto Contador literally flew up the mountain. After Verbier, he has the race leader's yellow jersey, and looks to be the favorite for this year's Tour, but you never know until the race finishes on the Champs d' Elysee in Paris.
For this blog entry, Liam and I have put together a seven minute video. The goal of the video is to bring you up the mountain -- with us-- in Verbier. We don't have any music or photo montages for this post. It is all the sites and sounds of the mountain. It was an incredibly beautiful day in the Alps. Liam was riding very well. In fact, at times, I was having a tough time just keeping up with him! We met a lot of new friends on the mountain, and, as usual, it was fun just being a part of the race itself.
Posted by Bill & Liam Flanagan at 2:21 PM