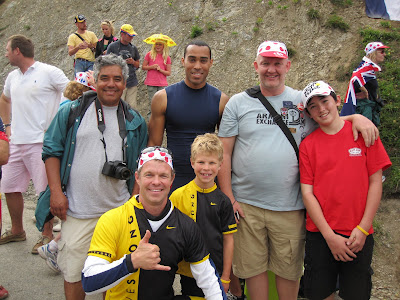 Friends on the Colombiere

We have made our way back down to Annecy, France in the heart of the Haute Savoir. I feel that in many ways this region has been the hub of our trip. It is here, on the Col de la Colombiere, that we met Lance Armstrong one week before the start of the bike race. In this region Liam rode his first few alpine climbs. It is also here, over the last few days, that we have witnessed the drama of this year's Tour de France unfold. The stages here in the Alps are proving to be the core and heart of this year's race.

I had thought that we might be burned out by now, however, the stages and our adventures during them just seem to be getting better. Part of it is that we are getting better at the logistics of watching the Tour. We have gotten better at choosing the sections of the day's stage to ride, and also better at choosing locations from which to watch the riders pass by. We consider ourselves lucky, in that we continue to meet really amazing people along the way.

On Tuesday, we were making our way to Bourg de Saint Maurice -- the finish of stage 16-- from Switzerland. At a certain point, Liam and I decided to take a slight detour. It was beautiful weather and, as we were driving past Lake Geneva, the temptation to jump in the lake for a swim was to great to pass up. We decided to make a stop in Evian les Bains. Not only does this town have some great tasting spring water, but also the lake here, at this time of year, is phenomenal. We found a spot by the water a few miles outside of town and spent a few hours being -- well -- French. We did a little swim, got out, took some sun, ate a baguette, and then repeated every half-hour or so. We lost track of the time and it ended up being too late to be able to catch the finish of Stage 16. It was well worth it. I wish I could bottle the experience along with the spring water!

On Wednesday, stage 17 lived up to its hype of being the Queen mountain stage of this year's Tour de France. It also had a special significance to Liam and me. This was because the last climb of the day was over the Col de la Colombiere. We would have the chance to see Lance Armstrong race up the same climb we had rode with him just three weeks before. We rode up to the top of the Colombiere from just outside of the town of Thones. It was about a fifteen-mile climb to the summit. In contrast to the cloudless day when we first met Lance, yesterday it was wet, windy, and cold on the mountain. When we got to the summit, there must have been 300 to 400 people cramming into the tiny restaurant at the top trying to stay warm. Luckily, as the riders approached the weather cleared. The atmosphere was electric. This was by far the most exciting mountain stage yet. We watched the stage about 100 meters from the summit of the climb. It is the same section of road that we climbed with Lance in the Livestrong video. When Armstrong came up this day, he was absolutely hammering.

We met several dads with their sons on the summit. Jaime and Erik from San Francisco, Terry and Kendall from Australia, and two more from Wales; but, unfortunately, I didn’t catch their names. Everyone was really enjoying the experience. I saw several other families on the summit. It is great to see people uniting and sharing this celebration. Mothers, fathers, sons, daughters, and grandparents all joining in this festival of life.

After the stage, the ride down took us past the finish hamlet of Le Grand Bonard. It was 9 o’clock at night before we made it back to Annecy. When you are following the Tour de France, the days can be incredibly long. 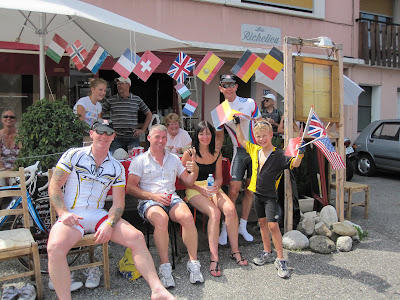 Friends from the Annecy time trial

Today, for stage 18, we woke up at 7am to ride the Annecy time trial course. Unfortunately, the police closed the course at 8am. We were directed off the road and onto the Annecy bike path. On the path, we ran into Markus and Patrice whom we had met on the Colombiere the day before. We hooked up with these guys and really started hammering. Liam was holding 23 to 24 mph. The ride was a lot of fun. On the way back into town we met Collin and James from the north of England. The town of Annecy was starting to swell, and it was getting pretty crowded at the race start. We went by the Astana vans to watch some of the riders doing their warm-up for the time trial. After about thirty minutes of this we headed back out of town to find a good -- less crowded -- spot from which to watch the race. We watched the time trial and then rode another 20 miles after the race was over. It was Liam's first fifty mile day... at eight years-old!!! On the way back to the hotel in Annecy we stopped by the Versus television truck and met Frankie Andreu. Frankie is a former pro-cyclist who is now a sports commentator. 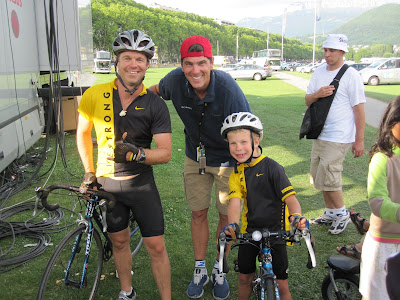 Tomorrow we head back down to Provence for stage 20 which finishes on the summit of Mont Ventoux. Then it will be up to Paris for the final day of the 2009 Tour de France. The pace is furious, but we are enjoying the ride!