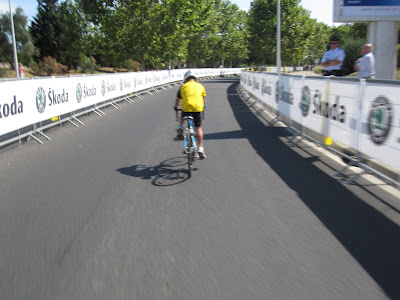 Liam on the time trial course in Montpellier


Today, in Montpellier, Liam and I really hit our stride. It was a good day for us and it was areally good day for the Tour de France. We were up early, had a great breakfast, and were out on the bikes to ride the team time trial course. Riding this 24-mile course had been one of our goals for the trip. We started out at eight in the morning. The start was from an impressive central plaza in the center of Montpellier. Montpellier is a fairly large university town in the Languedoc-Rousillion region of France. We set out from the plaza on a route that took us under the town’s Arc of Triumph. Liam, however, started to get a little frustrated because the roads were still not completely closed off to traffic. After about three miles, a French news crew approached us. They interviewed Liam and me, and then blocked the traffic with their van as they filmed us riding out of town. This really got Liam pumped. We jammed that time trial course in about an hour and thirty-five minutes. Our only glitch was Liam running off the road into the ditch at one point—It is the same spot that some of the professional riders went off the road later in the day during the race. Mais pas de probleme. A little dust off and Liam was back in the saddle in no time. After our time spent in the Alps and Mont Ventoux, Liam is riding very well. In fact, the speed at which he covered the twenty-four miles really surprised me. 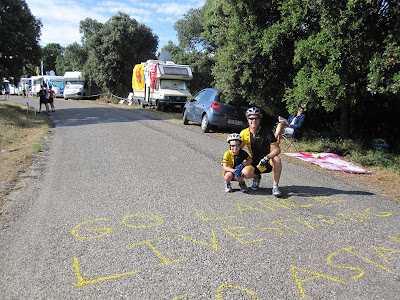 At the halfway point of the race, we got off the bikes and took some yellow chalk and marked the road. GO LANCE LIVESTRONG, GO ASTANA! As we were finishing our ride several teams started to come by us. The teams were out riding the course once before the race for a preview of the course. The wind was starting to kick up and there were some fairly technical sections of the route. At one point, a rider came screaming by no than a few inches from the back of a team car. They most have been going 50+ miles per hour. That was quite a sight. Neither I, nor Liam, had ever seen anything like that. 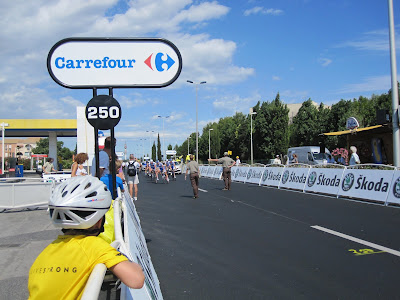 Riders coming off the course after their preview

After we finished riding the course, we ended up hanging out and watching the professional riders come by after their previews. The Astana team came by and they looked really good. Lance even said hello to Liam, it was the first time we had seen him up close since our ride up the Colombiere. Instead of going back to the hotel before the race start, we ended up staying at the finish line for the rest of the day. And, what a day it was! The race was incredible to watch! 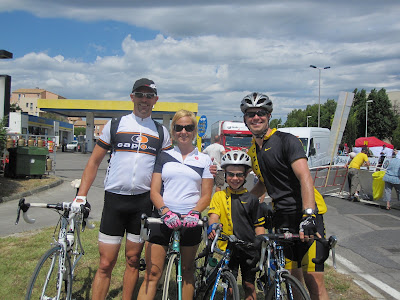 By the end of the day, we had met some new friends, and seen some really fantastic racing. Astana won the day, and Lance Armstrong had now moved up to a tie for the race lead. We had ridden this same course just a few hours earlier. Tour de France history was being made, and we felt that we are now somehow a part of it.

From here, we will take a break for a few days. Our plan is to head into the Pyrenees on the boarder of Spain and France to preview a few of the upcoming climbs of the Tour. We will wait for the Tour to come through this region in a few days. It is a hard decesion to skip Barcelona, but there is only one-way from the coastal city up to the first mountain finish of the Tour in Andorra. Logistically, making this trip would be very difficult. We came to see the Tour and ride, so, it is off to the Pyrenees we go.