Andorra - Camping in the Land of Duty-Free 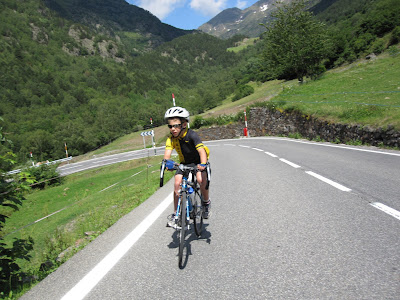 It is hard to get to Andorra. This independent mountain kingdom (Principality) is located high in the Pyrenees surrounded by the countries of France and Spain. When we first arrived by way of a twisting very high Pyrenean pass, I had two impressions, well, make that three, but I will get to the third later. The first impression was, “man this place is isolated,” and the second was “magical.” Liam and I were both looking for dragons flying overhead as we dropped down to the valley below. The valleys of this mountain enclave are a lush green, and traces of snow can still be seen on the mountain peaks at this time of year. The scene was -- for no better word -- majestic.

In our minds, we had just arrived in a fairytale mountain kingdom, that is, until we hit the main town. From this city, Andorra La Vella, came my third impression of the Principality, “traffic jams and duty-free retail.” Andorra has a duty-free status, and, apparently, the capital is designed for shopping frenzy. Today, however, despite the traffic, there were no shoppers. I guess the global recession has hit tiny Andorra. Everywhere we looked we saw signs for 50% to 70% off. Liam and I both wanted to get back into the fairytale. There is a time and a place for shopping, but we wanted to ride our bikes in the Mountains.

Just a few miles out of town the scene changes back to pristine mountain landscape. We found a great little campground at the base of the first mountaintop climb and finish of this year’s Tour de France. What is a father/son trip without a little camping? Liam has been wanting to camp since we got to Europe. I can’t say that I share his enthusiasm, but I have to admit it has been a lot of fun. 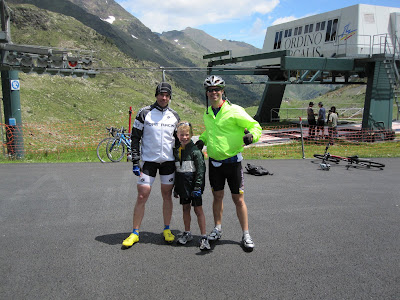 The Top of Arcralis with Shawn from Boston

Today, we got in a great ride up to the top of Andorra Acralis, the finish of tomorrow’s Tour stage from Barcelona. Liam bagged his second beyond category (HC) climb, and his first summit in the Pyrenees. At one point, I didn’t think he was going to make it. We were about 2 miles from the finish of this 12-mile climb. Liam was really struggling. Suddenly we realized he had been going up the mountain in his big front chain ring. It must have seemed like he was pedaling in quick sand. He changed into the lower front chain ring and I think we did those last two miles at about 10 miles per hour. Along the climb, we met Shawn from Boston. It was fun to share the climb with a fellow American, and talk about the race and the upcoming stage. Once again it was a great day in the mountains of Europe. When we got back to the campsite, I was beat, but Liam was pumped. He wanted to get in a brick workout so he ran around the campgrounds for about 20 minutes. The kid is an animal!!! 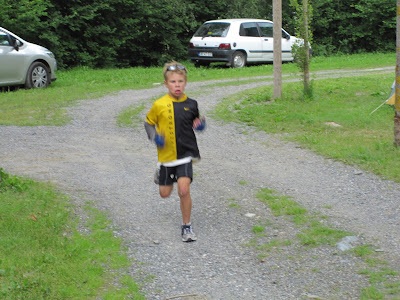 Liam getting in run after the ride

We can’t wait for tomorrow’s stage! There will definitely be fireworks on the mountains of Andorra!
Posted by Bill & Liam Flanagan at 1:29 PM