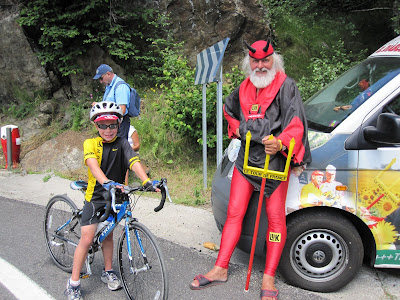 Today, the Tour was coming to Andorra for its first mountain stage and hilltop finish. Liam and I had been camping about fifteen miles from the finish. We had ridden the climb the day before, so our plan was to try to drive up to a spot about 3 or 4 miles before the finish to take in the race. We tried to leave our campground, but found that the roads were already closed. But -- we are cyclists after all -- so, out came the bikes and the Livestrong jerseys, and we set off with a picnic and plenty of water. I was a little concerned about Liam because he had put in a really tough day the day before. But as we started up the mountain, the crowds were going crazy, cheering Liam on. This was really pumping him up, and he flew up the mountain. With a backpack full of food and water, I was really struggling at times to keep up with his bursts of speed. 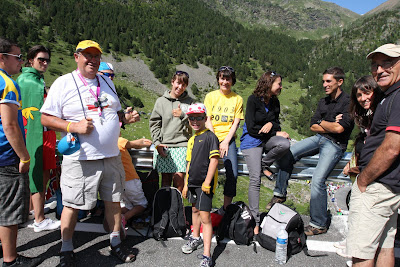 We rode into a celebration of life and sport -- a multicultural carnival, taking place high in the Pyrenees. We met some of the famous spectators that we had seen on the television year after year. One who stood out was the "devil." This horned cycling fan appears to be sponsored by a German bio-fuel company. I drew this conclusion by seeing his bio-powered devil mobile with the company’s logo all over it. 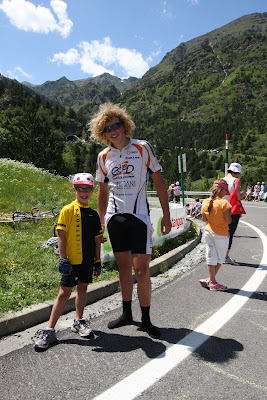 During the last part of the climb, we met up with 16 year-old Oliver from Australia. Oliver had ridden for six hours up from Spain. His dad and grandfather were following by car, but had been stopped about 20 miles below in Andorra. Oliver is on a junior biking team in Melbourne, and Liam really enjoyed talking to him about his riding. At 5 kilometers from the finish line, the police were stopping anyone from going higher. This was ok, because it was a great area from which to watch the race. We were standing on a steep switchback in the road. From our vantage point, we could look down the road and see the riders coming up for about a kilometer. It was a great place to experience the stage. We made friends with people from France, Spain, Andorra, Australia, Belgium, Britain, Ireland, Germany, and some fellow Americans. At any one time you could hear French, Spanish, English, Catalan, and German being spoken. Everyone was simply enjoying the moment. Liam at one point got on his bike and did some sprints up the hill. This really got the crowd going! 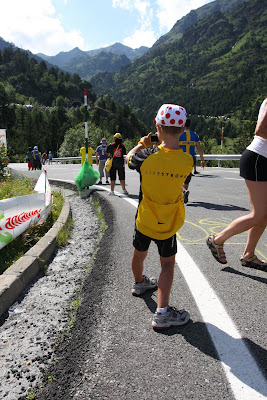 As the race came by, we got some great photographs of some of the riders. Then my attention turned to getting Liam off the mountain before the descent got too crazy. As we were descending, some of the professional riders came by—it is faster for them to get off the mountain by bike than to wait for the team cars to make their way through the crowds and traffic. Lance came past us and gave Liam and me a little nod. It was a nice way to finish the day. 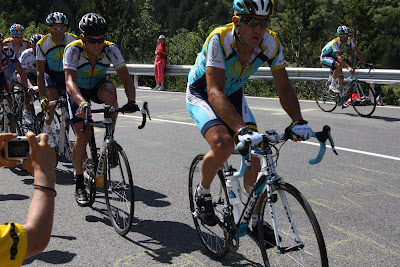 Tomorrow, the race heads back into France. Liam and I plan to go back to France for some more camping and bike riding. We will cross the Pyrenees and look for a spot at the base of the Col d’Aspin and the Tourmolet to wait for the mountaintop carnival to pass once again.
Posted by Bill & Liam Flanagan at 5:01 AM