Into the Land of Lavender and Sunflowers 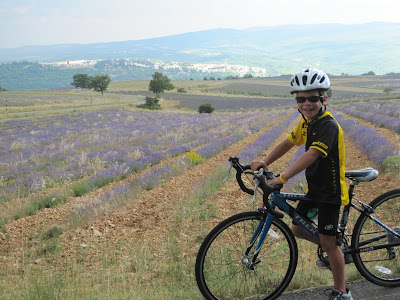 We were a little sad to pack up and leave the Annecy area. We had had several days of great rides in the surrounding Alps followed up by afternoon dips in the beautiful Lac de Annecy. Before we left we rented a paddleboat and just kicked it for several hours out in the middle of the lake -- father and son chillin’ in France. The best word to describe the feeling would be peace. It was one of those moments in time that you want to freeze and have last forever.

We will be back in Annecy in three weeks as the tour rolls through, but somehow I don’t think that we will be able to repeat the relaxed timeless atmosphere of the last week. We had made friends with everyone at our little hotel. I will never forget Monsieur Jose, the owner of the hotel, excitedly taking us back to the storage area to show us his amazing Spanish road bike. I will also remember the time, on our last day, when we came down for breakfast to a standing ovation. I couldn’t figure out what was going on until I saw the local newspaper. There had been a reporter and photographer at the top of the Colombiere, and there it was, on the front page, Liam and Lance. On the back page was another large photo of the Col crossing and a very complimentary article about Lance’s return to cycling.

After a quick stop at La Poste to mail a copy of the newspaper back home to California, we set off for an afternoon’s drive down the Rhone river valley into the heart of Provence. In just three and a half hours, we moved from the land of glacier lakes and cowbells to the land of fields of lavender and sunflowers.

I had been to Provence before, but only to the Cote d’Azur. I had read several of Peter Mayle’s books, but, for some reason, I had chalked up what he describes in his books as a bit of exaggerated fantasy. When Liam and I arrived in the hilltop village a Sault at the base of Mont Ventoux, we walked right onto the page of a Mayle novel. Here it was, a several hundred-year-old town perched on a hill surrounded by fields of lavender. I was halfway expecting to see the British author sipping pastis in the local Café watching the game of boule taking place in the town square.

When we awoke the next morning, the first thing that we felt was the heat. It is hot in Provence at this time of year. We had planned to do a morning ride from the town up onto the slopes of Mont Ventoux, but the heat was sapping our motivation. Luckily, Wednesdays are market days in Sault. Instead of setting off on our bikes in the wilting heat, we spent the morning checking out the Market. This symphony of fruits, vegetables, spices, and crafts had taken over the streets and the central square of the town. Liam made friends with a few of the local vendors. He got to discover the history of the local olive oil which they prefer cloudy not clear. (I have to admit the cloudy version does taste better, and the vitamin and mineral content is much higher.) He also spent an hour with Pamela, a local vendor, who was kind enough to give Liam an insight into all the local spices of Provence. 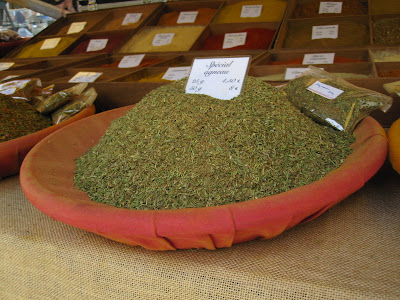 So if you happen to be in Sault, on a Wednesday, be sure to look up M. Alain Farnoux and his wonderfully healthy Olive oil, and Pamela with her great selection of savory spices.

As we were finishing our lunch—lunch is the main meal of the day here, and it typically can go on for several hours—a thunderstorm rolled in and cooled things off. Being from Southern California, where we don’t get that much rain, it was cool to stand in the middle of the plaza just getting wet. That is, of course, until the hail started pounding down!

The storm passed and we were able to get in a great ride. In fact, it was a ride that we had not planned to do this early in the trip. We set off from town and were going to head up as far as we could go onto the summit of Ventoux. Liam was feeling a little more pep than usual after our meeting with Lance Armstrong a few days ago. In Fact, WE MADE IT TO THE SUMMIT!!!

The ride was an incredible 26 kilometers which drops down from the town, passes through fields of lavender, heads up through a forest, and finishes with the classic switchbacks on the windswept barren summit of the Ventoux. From the top there is a view of the whole of Provence. This route is one of three ways to climb Mont Ventoux, and it is a bit easier than the classic route up from Bedoin that the Tour will follow. However now the pressure is off. No matter what happens in three weeks, when we are back with the tour, Liam can now say he has climbed the "Giant of Provence." 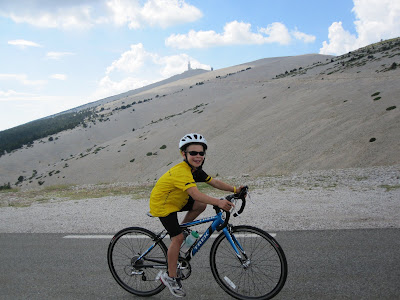 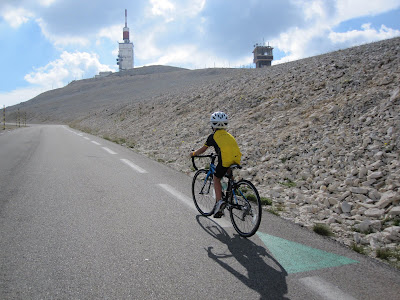 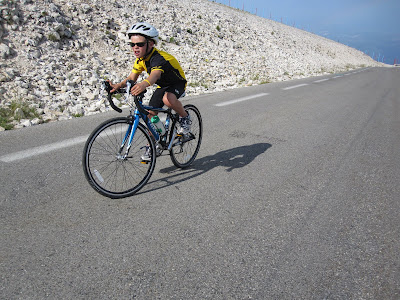 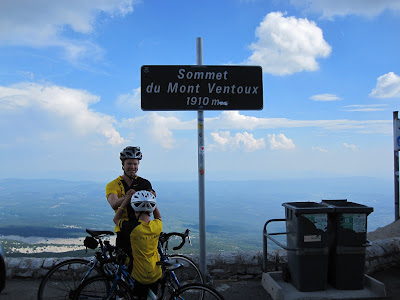 After some time to take it in at the top. We descended back down to Sault in the golden afternoon light of the Vaucluse, to finish, yet another, perfect day for a father and son on a grand adventure in France.
Posted by Bill & Liam Flanagan at 1:13 AM