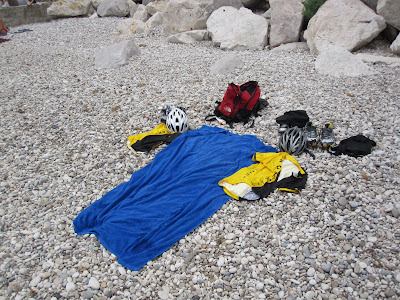 Our gear on the Beach in Monaco

Liam and I are slowly putting together a tapestry of our experience here in France. We are quilting together patches of the fabric that represent places we go, the things we experience, and the people we meet along the way. The common thread that ties all these pieces of fabric together is the influence they have on our growing bond as father and son. It is a bond that is growing stronger, by the day, as we follow this great caravan of sport and human endurance through France.

We didn’t get to Monaco as early as we had planned. The idea had been to get in early and ride the course a couple of times. I had seen Formula 1 racing, and the idea of riding bikes in Monaco on those same perfect roads was too good to miss. In my mind it was going to be a classic experience. 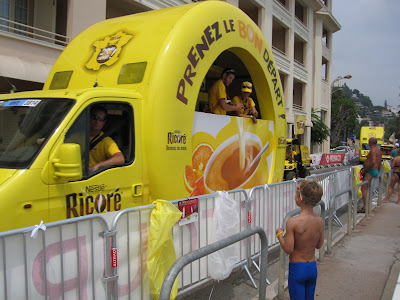 The Tour Caravan travels the whole race course about an hour before the stage begins.

All had all been going to plan. We arrived in Nice the afternoon before the start of the race. Took a dip in the ocean. Ate a pasta dinner that cost fifty euros. (The prices here are insane, but it was good pasta!) Then we turned in to get some sleep before the big day. I awoke at midnight with a strange feeling. It was a sensation that we were under siege. I felt like I was being eaten. The window to our hotel room was open, so I thought that, perhaps, mosquitoes were getting into the room. When I turned on the light, I discovered--to my horror-- a different story. The beds in our hotel room were infested with bed bugs. I had always heard the saying – “Good night. Sleep tight. Don’t let the bed bugs bite.” There was no way we were going to be able to sleep here. In fact I started to get the suitcases and clothing away from the beds as fast as I could. How do you say bed bug in French? I wanted to change rooms, but the hotel was full, as was every other hotel in Nice, because of the Tour de France. After much negociation (which included actually taking the lady at the front desk up to the room to show her the bugs,) we were able to sleep on the couch in the breakfast room of the hotel. What did the hotel do about the situation? Did they refund our money for the night? We still had to pay full price, but they did, however, throw in a complimentary breakfast in the same sale de la petit dejeuner that we slept in. Although it was a really bad travel experience, ironically, I think the night spent in that little breakfast room will be one that Liam and I talk about for the rest of our lives.

We left our bags in a new room (that was hopefully bed bug free) grabbed the bikes and headed to the train station. It was at the station, that I started to realize the full impact of our ride with Lance Armstrong. It seemed that almost everyone in the train station knew Liam’s name. Wow, the video clip of our meeting on the Livestrong.com website had seemed to strike a cord with people. It was really incredible to meet people, who had seen the clip, and to not only share our experience, but to hear their experiences here in France as well. We met Ken from England and his wife. They had come to France to see Lance on all seven tours he had won before. Now they were here for an eighth time. Ken was wearing 7 Livestrong yellow bands on one wrist and an eighth on the other. The couple were dedicated cycling fans and fellow supporters of the fight against cancer. There was also Craig and Tracy, from Houston, Texas (I hope I have their names right) They are here in France on an organized bike tour, with their professional cycling guide. We meet them at dinner, and they were kind enough to pass on some tips about sections of the upcoming stages that would be good for Liam to ride. It is the people that we meet along the way, and our interactions with them that are becoming some of the most memorable moments of our trip. 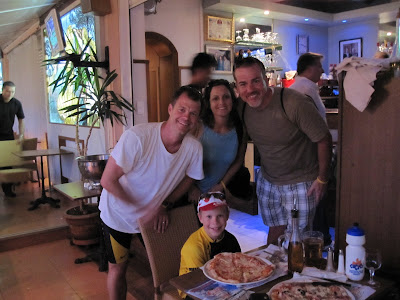 We arrived in Monaco a little too late to ride the whole course, but we were able to ride open sections next to the course. We found a great section of beach, and took a swim in the Mediterranean. I could think of no better place to spend a few hours just before the start of a bike race. 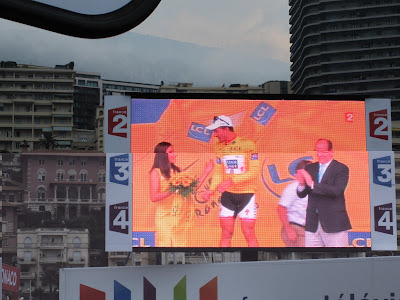 Winner Fabian Cancellara with Prince Albert, we had passed the Prince on the street on his way to present the Yellow Jersy this presentaton.

We ended up watching most of the time trial from a section of the course near the finish line that was also within viewing distance of a huge screen with live coverage of the race. We were there –father and son in the center of Monaco and at the heart of the Tour de France—soaking in this incredible first day. 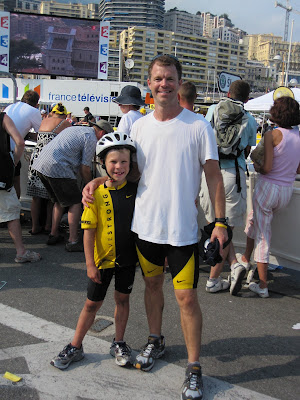