There is saying in French :"Tête et jambes" ... "Pour gagner une course de vélo il faut avoir la tête et les jambes, mais surtout la tête." In English it means: "Head and legs. In order to win a bike race one needs both to think with your mind and have good legs, but most important is the mind." There is a lot of insight in this simple statement. It was one of the first things that was said to the boys when they joined their cycle club here in Provence. Coming from America, we are generally power riders. Lots of heart, great legs and the desire to get out there and just "get 'er done." That is a great spirit and attitude, but it doesn't always win bike races. In a bike race one has to know when to lay it down and when to conserve one's energy. You have to also be able to read the guys or gals you are racing against. It is almost like a game of Texas hold'em, but you pretty much know that everyone is holding good cards; it is more a question of when and where to play them. Last Sunday in Marseille, at the first race of 2012, Liam played his cards perfectly. 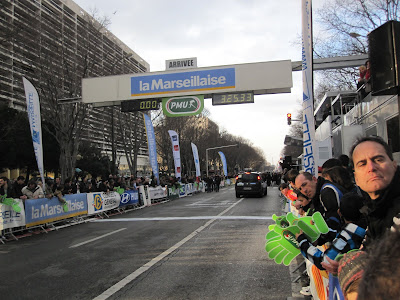 Arrivée of the first Pro race of the 2012 season

The Gran Prix de La Marseillaise is the first professional bike race of the year here in Europe - it is the season opener. The pro race is 150 kilometers long and finishes in downtown Marseille in front of the football (soccer) stadium. Before the arrival of the pros, there is a youth criterium-style race that takes place. The youth race is part of the Gran Prix and takes place all around the stadium on streets closed to traffic. It is well organized, and is timed so that, 30 minutes after the youth race and awards, the kids are all able to watch the arrivée of the pros from a great location right on the line. The youth competition is part of the budget of the race, a way for the organizers to give back to the community in their support of youth programs. 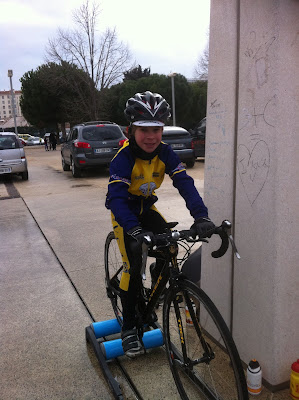 Le métier - warming up for the race
Because it was the first race of the year, the date was marked on the calender and all the boys were very excited about it. When we arrived to start the warm-up and get oriented with the course layout, Liam had some doubts. Because of construction around the stadium, the circuits of the criterium were shortened and there were many tight, technical turns. It was also raining most of the morning so the course was wet and slippery. Liam rides best on hills and where there are sections were he can open it up and power. This course was very different and he would have to adapt. We talked about the course and decided that Liam would ride the course like a cyclocross race, but with the only difference being that it was taking place on pavement. He wanted to get into the first group, make sure the tempo was high enough so that it thinned out the field, and then he wanted to be patient and wait. He was feeling that he had pretty good legs so he wanted to make a move early but not too early. He thought that he would make this move with either three or four laps to go to the finish. The plan went very well, and Liam pulled off a win in the first bike race of the 2012 season! He is now 2 for 2 here in France on the new Trek Livestrong bike. He is indeed an inspired rider. 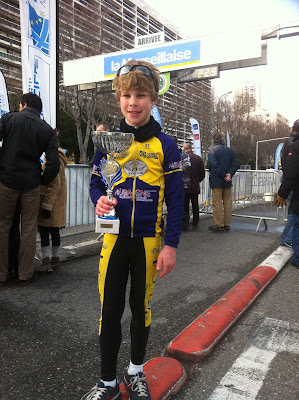 I was able to get most of the major parts of the race on film. What you don't see in the video is that, on the last part of the first circuit, Liam had a slight crash, he put a foot down, but got back up and going quickly, and was able to catch back up to the lead group. This is where the experience of racing cyclocross and mountain biking throughout the fall and winter has really paid off. 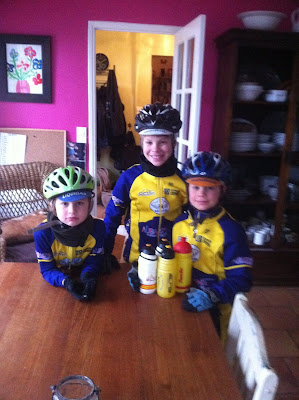 Aidan and Roan (Liam's younger brothers) also had very good races. They are all maturing and improving as riders on the bike. It is fun to be a part of it all as "Directeur Sportif" of the FatherSonTour cycling project!

This is Bill and Liam signing out
Posted by Bill & Liam Flanagan at 12:45 AM 3 comments: 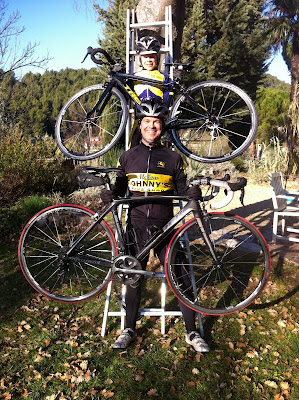 Here in France, one thing that stands in marked contrast to our experience in Southern California is the intense difference between the seasons and the speed at which they pass. There is not a huge difference between summer and fall in California, the two begin to blend into each other, and it is nearly impossible to say when one ends and the other begins. It could not be more different here. “Boom” down comes the curtain and the total scene changes. One day we are out in the pool listening to the cicadas, taking in the intense heat of the sun. The next day we are bundling up against the wind and biting cold coming from the North. Gone are the sun filled afternoons that seem to last till midnight. The trees, as if responding to a stage cue, promptly start shedding their leaves, and, in unison, the whole landscape starts to pull back its outward vibrancy. 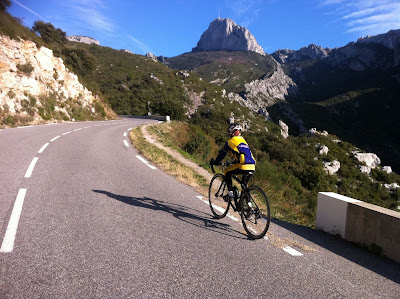 Mild Fall and Winter this year - great for riding!

I didn’t really like the fall and winter here last year. It was a rude awakening of sorts after living in the eternal summer of Newport Beach. This year, however, the intense differences are starting to grow on me. Instead of looking at the cold as an inconvenience, I am starting to appreciate the changes that the season brings. (I must admit that this winter has been very mild compared to last year). The whole French culture adapts in response to the changes in the weather. Take the clothing for example - the bright pastels are replaced by browns, blacks, dark reds, and greens. The food changes from the lighter summer fare to more hearty meals like roasts and winter soups. The rosé is put away until the spring and it is replaced by the darker red wines of Bordeaux, Burgundy, and the Rhone valley. We are invited to parties to celebrate the wine harvest, the olive harvest, the release of theBeaujolais nouveau and, of course, Noël and le Jour de l’An. It is impossible to separate the food and wine from the culture of France. Just as the food and wine change with the seasons, so do the meals and social events that revolve around them. This is a concept that I (kind of) got the first year we were here, but now I am starting to get these things in a deeper more profound way. For the second year in a row we brought in the New Year eating and drinking with our French friends here in Auriol. 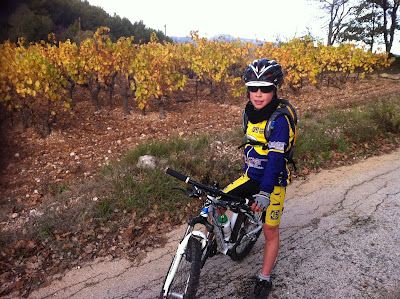 Winter vines on the mountain bike
It could be said that our time in France is kind of circular as we go round and round with the seasons, but it is really more of a spiral. With each turn we get a deeper, clearer understanding and insight into French culture. This spiraling journey also gives us a clearer and deeper bond as a family. Suddenly things that seemed very bizarre start to perfectly make sense. For example, take the incredibly time consuming tradition of French greetings. At first, I thought it was crazy to come into a room and be obligated to go up to each individual and give him or her either a biz (a kiss on both cheeks) or a handshake depending on the level of the familiarity. Each time a new person enters the room; you would have to start the whole process over again. It takes 10 minutes of kissing and hand shaking just to get our monthly vélo club meeting going. Now, this tradition is so second natured, that the old way of coming into a room and simply sitting down to start a meeting seems very impersonal and out of touch. It seems that the obligation has now turned into a joy. 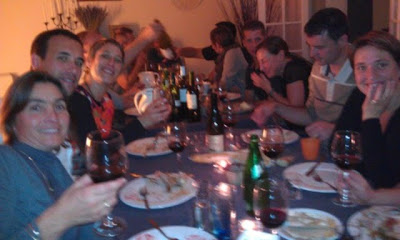 Vivre les fêtes
All the boys are going through their own cycles with school, friendships, and their athletic accomplishments. So as we head into another year of our French adventure on and off the bike I’d like to take this opportunity to wish you a very happy New Year – may it be filled with much love and joy and may your dreams come true.

This is Bill and Liam signing out.
Posted by Bill & Liam Flanagan at 3:18 AM 1 comment: