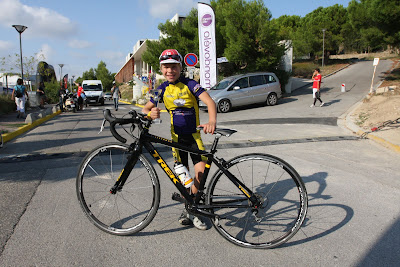 It is true that winning is not everything, but, man, it is certainly great to work really hard and have it all come together! I think the story of our first year in France is a story of dedication. It is a story of obstacles overcome. Occasionally, it had its share of set backs and bumps in the road, but in the end it is a story that shows that hard work and keeping your chin up really does pay off. 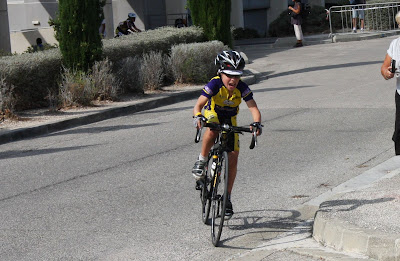 Bringing it home in Marseille
When we arrived in France a year ago Tavi and the boys hardly spoke a word of French. We where changing houses, schools, leaving friends behind, and moving to a new country, where we literally knew no one. Tavi and I had a long talk and agreed that we wanted to put the boys ages 6, 8, and 10 directly into a French public school. There were other options – international schools were just 15 minutes away in Aix, but I had the feeling, that, if the boys could get through the first few months, over the long haul the public school would be much better in the end for their assimilation into France. We told the boys that it was going to be tough, but that, they could do it – we smiled a lot, put on a brave face, and talked it up. Underneath the cool façade, we, of course, had our doubts and fears. Could they actually do it? What would we do if it didn’t work out? 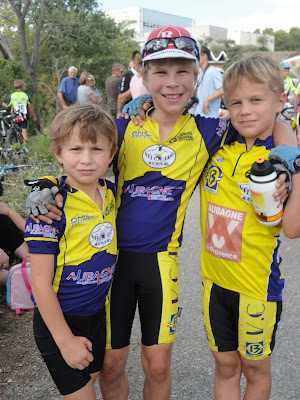 I still remember the boys' first day of school in France. The boys soldiered into their new school, however, just before disappearing into the building hesitantly looked back at us with the expression that said “are you really sure about this?” It is hard enough to start a new school and make new friends, but to do so in a place where you don’t fully understand the culture or speak the language is very, very difficult. The boys sat in class on their first day and didn’t understand anything that was being said in the classroom. “Hello, what’s your name?” was the extent of their new classmates English and the boys didn’t speak much more French. It was difficult and I think at times all the boys had their doubts that they were actually going to be able to do it. For the first few months we would ask the boys how their day went after school. “Terrible” was always the response. It was tough – tough to learn the language, tough to make new friends, tough learning how a new culture works and not to be misunderstood. Some days the boys were in tears. 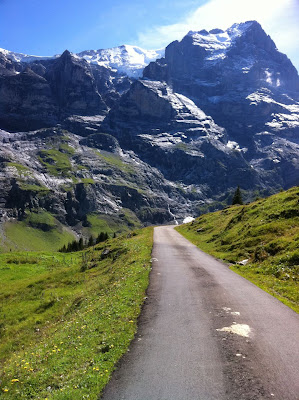 Sometimes it is a difficult road ahead

Then one day, just before Christmas, we asked the question about how the day went, and we got “OK.” It wasn’t a “great” or “super” but it wasn’t “terrible” either. This was the day that I knew that we were all going to be all right in our new home. Soon the boys started receiving invitations to birthday parties, having sleepovers and actually getting some praise from their teachers. They started to get compliments on their French. It didn’t all come at once, and there were a lot of difficult days, but they did it. 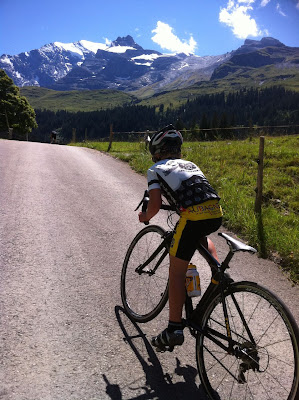 One pedal stroke after another

All through our first year in France, the boys were also working hard on their cycling. They are all big fans of riding their bikes. I must admit that, as a parent, I planted the seed with my love and enthusiasm for the sport. They have now taken that involvement to a new level. We have a tennis club down the street, and handball is big in our town as well. The boys like those sports, but it would seem that, for now, their true passion is cycling. They have all chosen to stick with it.

Just as there was a new language and culture to learn with the boys’ French school, there was also a whole different rhythm to riding and racing bikes in France. It took a while to adjust and adapt to the French way. The boys worked really hard. Liam had some early success in his very difficult category, but then had essentially a whole year of what we call “paying his dues.” There were many races in which he felt he could have done much better. In some races there was bad luck – a flat tire, a crash, throwing a chain. That is bike racing. It is a crazy, hard sport. It is a lot of fun, but in order to excel at it you need a lot of dedication. In this day and age of attention spans of a nano-second, Liam is an 11 year old with a ten-year plan, and he sticking to it. I do admire him for that.

Finally, in the last few weeks, everything here has come together as we head into our second year in France. The rentree (when all the French come back from their August holiday and return to school and work) went by, for the most part, without a hitch. The boys now, after all, speak the language that their classes are taught in - which is a huge plus. It was the smoothest start to any school year that I can remember. We now have lots of great friends in our little French village. Liam has moved up to middle school, called “college” in France. He made the school mountain bike team that had four national champions last year. We had a return to road racing last weekend with a few wins in Marseille. It was a difficult field on a very hot, hilly course that was well suited to the Flanagan boys’ strengths. Both Roan and Liam won their categories! 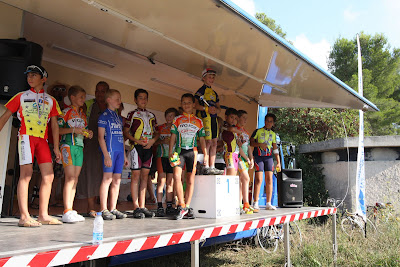 On this day - it all came together for Liam 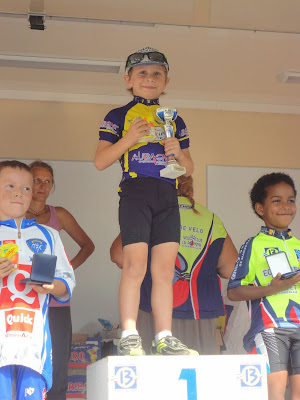 Roan on the podium in Marseille

Liam has really gone the extra mile this year. He knows what it takes to do well here. Roller sessions after school, longer rides on days off and weekends, cross training, eating and sleeping well are all part of his routine. I guess it all comes back to that one word - dedication. 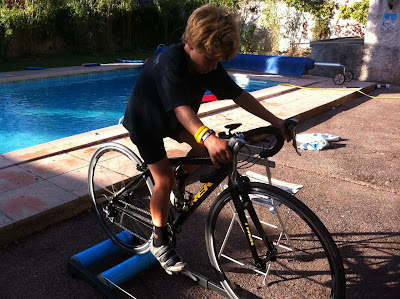 Rolling at home after school

Now, as we head into our second year in France, we are all even more thrilled and excited to be here continuing with our great adventure. And, to make things even better, we speak the language well enough to get what is going on -- at least -- most of the time.

Bill and Liam signing out