As we were driving from Bordeaux to Paris for the finish of the 2010 Tour de France, Liam could not stop thinking about the Junior Cycling Tour in Holland. Mike and Clare Barry had first told Liam about the event when we had met them at the final time trial at the Tour de France. The Barrys are the parents of Michael Barry who is a professional cyclist from Team Sky. When Michael was younger, a highlight of their year was when they would make the trip to Assen so that Michael could get some great experience racing bikes with other kids his age in Europe.
When we arrived in Paris, we looked up the European Junior Cycling Tour Assen (EJCTA) on the internet and discovered that there was still time to enter the event in 2010. The event would take place from August 2nd to the 7th. EJCTA is a six day stage race complete with time trials, criteriums, classic road stages, and cobbled sectioned omloops! It had captured Liam's imagination! Liam would turn 10 on July 27th, and he would be able to get his international USA Cycling license. After a flurry of activity, we were able to get Liam an international racing license and an entry into the stage race. 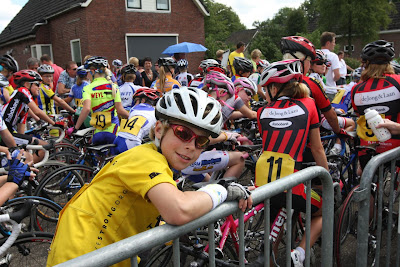 After the incredible Dutch flavor we had to this year's Tour de France, it is great that Liam's first stage race would be in Holland,. We had met so many great people from Holland out on the roads of the Tour. The experience was really a perfect book mark for the Tour. 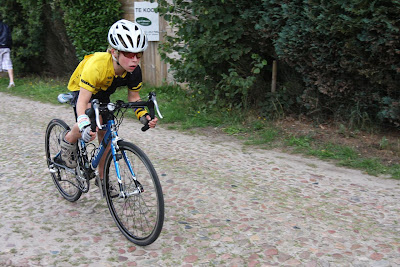 A taste of racing over the cobbles

Assen is in the Northeastern part of Holland which is a 6 and half hour drive from Paris. Liam and I packed up the tent, sleeping bags, and bikes; and set off for a week of cycling and camping in Assen. A quick look at the weather and I knew that the experience was going to be a wet one. Rain was in the forecast for the entire week.
We arrived in Assen on Sunday just after noon. As we pulled into town, all you could see were kids from 8 to 18 on their bikes getting ready for the event. It was a jamboree of youth cycling. We set up our tent at the Weilerhome which was the main venue for the event which was in its 46th year. From the beginning all the organizers and volunteers of the race were very helpful and friendly. In the camp ground Liam immediately began to make friends with other kids his age. That is really what the whole experience is about! 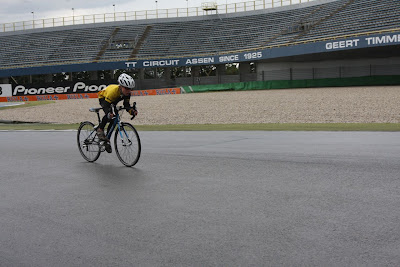 Liam started rolling by day 4 for the tt on the Famous Assen race track
The racing was tough. Day 1 we had a problem with Liam's gearing. In Holland, young racers are only permitted to have certain limited gear ratios. For the first time trial Liam was locked out of his big chain ring. This was difficult for a kid who is used to pushing big gears in the Alps. We got this problem fixed with a visit to a local bike shop, but not until Liam finished 29th in the first Time Trial. Liam also had to get used to the fast pace these riders go. Up until now he had been riding with me - his dad ( I don't go tearing around all the time at 24 MPH.) It took Liam a few days, but he started to get the hang of it and by day four, five, six he was right up there with the leaders. He made the comment on the last day of the race, that he wished the event were 20 stages long. 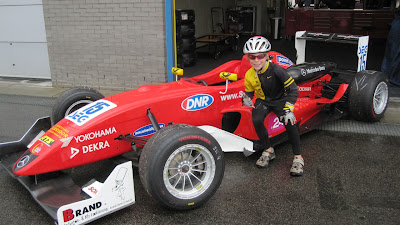 Assen is Famous for its Fomula 1 and Motorcycle track

All through the week there were great activities for the Tour participants. A highlight, for us, was a visit to the local ropes course. It was a great experience and an opportunity to meet some of the other kids in the race. We will always remember swinging from the trees 8 meters high in Assen! 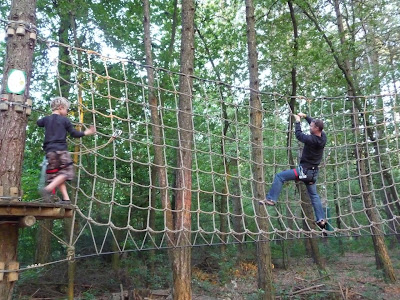 Up in the trees in Assen
Many of our Dutch friends and friends from the cancer fighting community gave us great messages and support on Twitter and over the internet throughout the event. These really were great for Liam's moral. In fact, Gaby Zwaan the Dutch artist actually made the trek to Assen to see Liam Race. That was very, very cool! Liam was also proud to be racing in his Livestrong kit. He is just as passionate about a world free from cancer as he is about bike racing! He also realizes that there are many out there putting there heart and soul into this fight.
Liam did really well for his first experience in a UCI sanctioned bike race. After six days in Assen, Liam finished 20th overall on GC, he met some great European kids his age, got some great racing experience, and generally had a blast. We hope to be back next year for sure, and Liam already has his eyes on a top 10 placing on the GC! 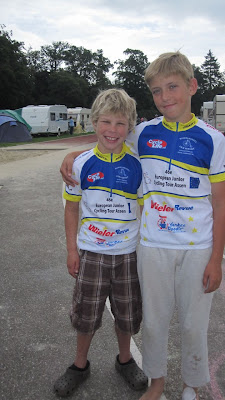 Alexander a new Dutch friend and fellow cyclist
For more information about the event in Assen and some great articles from the race by reporter Jose Been click here for the link to the EJCTA website.

Life Strong, Train Safe, and Live Well!!!
This is Bill and Liam signing out!
Posted by Bill & Liam Flanagan at 12:20 PM 43 comments: