Sometimes you are faced with difficult decisions, but, at other times, difficult decisions are made for you out of circumstance. After I finished the first Etape de Tour, I had 6 days until the second Etape (an amateur cycling event over a real stage of the Tour de France) which was on July 17th. One look at the weather forecast, told me that it was going to be ugly. The forecast was for torrential rain and cold, with a high of 14 C (or about 50 degrees F). I am now well into my 40's, and smart enough to realize that a 208k ride through the Massif Central in those conditions would wipe me out for several days. I really wanted to ride both Etapes and, at the same time, actively follow the last week of the Tour riding through the Alps, with Liam. Liam is still only 10 years old, but get him on a climb in the Alps and you would never know it. He is "slaying it" at the moment, and it is taking everything I have to be able to keep up with him and film at the same time. I soon realized that our Tour wouldn't be possible if I rode the 2nd Etape. The decision was made. 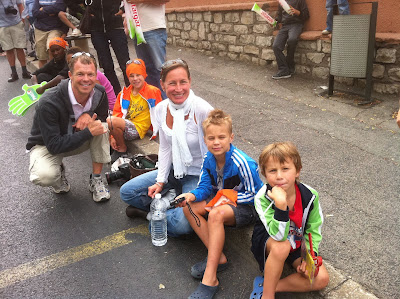 Back on the roadside of the Tour 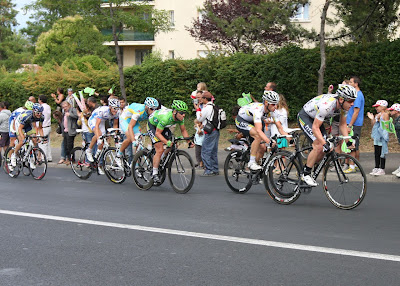 Getting a lesson in sprinting from these guys

At the last minute, we switched course. Instead of Saint Flour and the Massif Central, we headed towards drier and warmer riding and the finish of the 15th stage of the 2011 Tour de France in Montpellier. We were on the road and headed to the Tour, and it felt great. Montpellier is a very cool university town on the Mediterranean coast. Over the years, we have gotten pretty good at picking spots along a stage to watch the Tour roll by. We found an uphill stretch about 4k from the finish. Along the road was a little cafe with fresh baguettes and drinks for a picnic. We had lunch and watched the caravan roll through with the race following about an hour later. We got a first-hand view of HTC setting up Mark Cavendish as the peleton roared by. It was a lesson in team work for the perfect lead out to a sprint. After the race, we headed into the center of the old town. Tavi, the boys, and I walked around the city and then at dinner time found a little restaurant that served a wonderful meal of sole meuniere, which went very well with a local white wine. I never seem to get tired of the spectacular food and wine here in France.

During the meal, we started talking about Mont Ventoux. Liam had climbed the mountain three times before, but always from the village of Sault. Now that Liam had had success on Alpe d'Huez, he was ready to have a go at a Bedoin ascent of Ventoux. The route up the mountain from Bedoin is a few kilometers shorter that the Sault route, however, the climb is considerably steeper and more difficult - with about twice the elevation gain. This is, exactly, why I had chosen to miss the Etape. We decided over a desert of Creme Brule to go to Bedoin the next day. So July 18th, the second rest day of the Tour de France we headed out to climb the "giant of Provence."

Mont Ventoux is a mystical mountain that rises up above the low plains of Provence. As you approach, you can see the white cap of the mountain from miles away. It looks like snow, however, it is exposed white rocks that forms the white cap on the final few hundred meters of the summit. When you are up there it looks like a bizarre white moonscape with amazing hues of blue and green below and above. The light is very intense on this mountain. 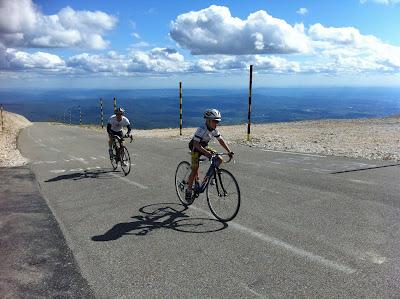 Liam starting to get a gap near the top 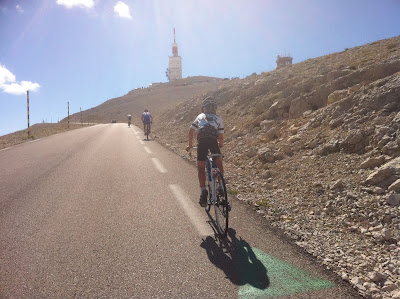 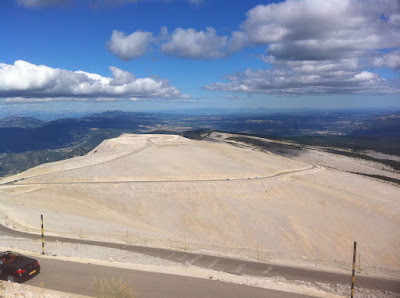 View of the moonscape from the summit

We started the climb from the center of the village of Bedoin. As we were getting, ready two cyclists pulled up to introduce themselves. They were Greg from Ireland and Monica from Holland. As it turned out, they had seen the blog and recognized Liam as they were passing by. It's a small world - this wonderful cycling family that we are now a part of! The climb was nothing short of fantastic. Liam climbed with grace and ease at a very fast pace of 1 hour 38 minutes. One of our friends on twitter told Liam to "slay it," and you can say that he truly did! All of which I was miraculously able to catch on video. I really was glad at that point that I had not ridden the second Etape. 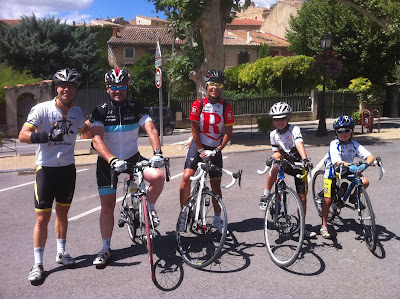 After we reached the summit, we decided to descend down to Sault and get one of our favorite pizzas on the plaza for dinner. The descent is beautiful - through high forest and then dropping down into low mountain fields of lavender. The smell of the lavender hits you as you drop off the mountain. Liam and I passed the spot that, two years ago, we had camped while following the Tour that year. In those very same lavender fields. Then it was across the plain and up into the hilltop town of Sault. We could almost taste the brick oven pizza. It might seem that our life is now revolving around food. I think it is just a natural consequence of living in France. 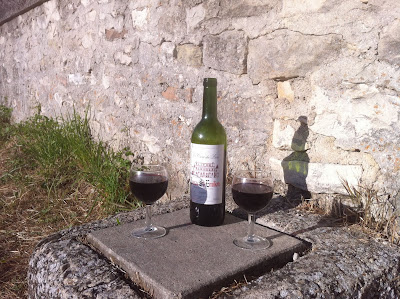 Perfect end to the perfect afternoon in France

We arrived in Sault to see that it was market day and all the stands were still set up even into the late afternoon. The late afternoon light on the plaza was was beautiful. Tavi had surprised me with a bottle of red wine which we had with our pizza. Sitting in the afternoon sun sipping wine and looking down on the fields of lavender. It was the perfect end to the perfect day in France on the Giant of Provence. 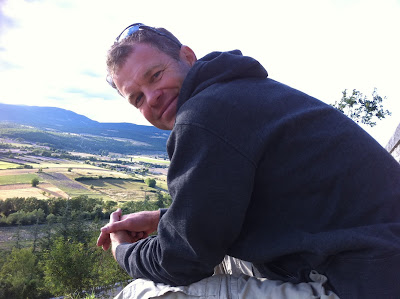 Happy Me - with view of lavender fields below Sault

This is Bill and Liam signing out.
Posted by Bill & Liam Flanagan at 8:45 AM