It is amazing that, so far this year, we have not been to a single stage of the Tour de France. And we are already more than half-way through the three-week race. After all, we now live in France, and you would think that we would be able to be at every stage or close to it. As it turns out, when you live in France, life literally starts to take on a life of its own. We do, of course, have a cool adventure planned this year. Our Father Son Tour will be back loaded this July following the intense last week of the Tour de France in the Alps, and then on to the finish in Paris. 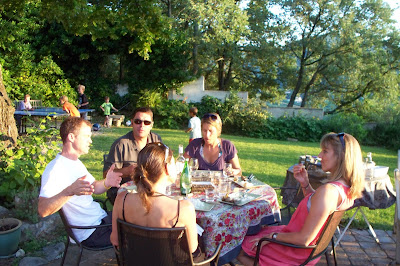 In between the boys' end of school parties (school ended July 2nd for the boys), our almost daily invitations to wonderful summer wine filled late afternoon get-togethers with our many new friends in the French village we now call home, and work on my book (which is now starting to find direction and a life of its own) we have managed to do a lot of bike riding. Liam's focus has been on the European Cycling Youth Tour in Assen which will take place from the 1st to the 6th of August. It will be the second year for Liam at the event, and he has some pretty intense goals this year. He is also really excited that some of our friends and Livestrong leaders from Holland are planning on attending. There may even be a Livestrong booth at the event. Assen in the largest youth stage race in Europe, and I think it is great for kids to have an awareness of the power they have to make a difference in the world. Even with something as simple and enjoyable as riding a bike. 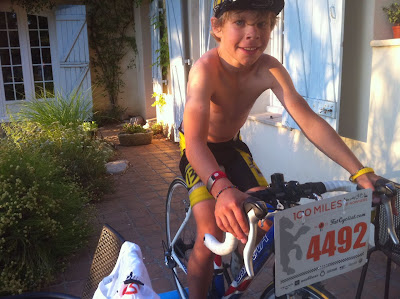 Making a difference on a bike. Fat cyclist's 100 miles of nowhere. Liam helped to raise money for bikes for kids in Africa with this "non-event" in the back yard on a roller

My personal cycling focus has been the Etape du Tour. An Etape is an amateur event that takes place over the same exact stage as the Tour de France. The Etape took place last week on the 11th of July and was a 109 kilometer trek over three alpine climbs - Telegragh, Galibier, and finally L'Alpe d'Huez. This same route will be stage 19 of the professional Tour de France which will take place on July 22nd.

Our plan was to turn the cyclo sportive Etape event into a family riding and camping adventure. The minimum age to participate in the Etape was 18 so, unfortunately, this ruled out Liam's ability to ride the actual event. We headed up to the Alps a day early so that Liam and I could pre-ride L'Alpe d'Huez. The last time that I had ridden up to the Haute Alpes ski summit was in 2006. This was the year that Frank Schleck won the Huez stage of the Tour. The Alpe really is sacred cycling territory. As you cycle its 21 famous switch backs, you can almost imagine that you are there in the middle of the mythic battles that have taken place in years past on this alpine climb. 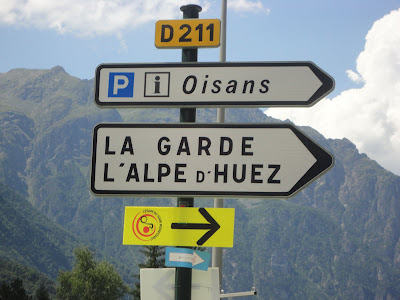 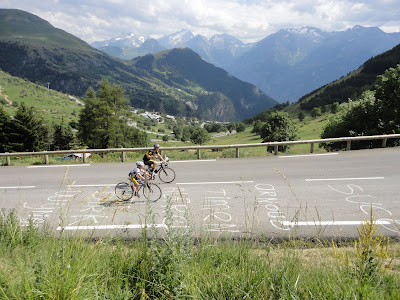 I think that riding the mountain with Liam was more important for me than actually riding the Etape. Liam - at 10 years old - didn't just want to make it to the top. He wanted to set a mark for this mountain, something that he could look back on as he grew older as a reference for his lifetime of cycling. He would be climbing the mountain "time trial" style. This meant that I would be riding time trial style as well (with one hand - while filming the climb). Probably not the best thing to do two days before a major race... The climb was really, really fun and Liam picked up the pace with every switch back. When we arrived at the summit I looked down to see the time, and was amazed at how fast Liam had made the ascent - 1 hour 15 minutes. 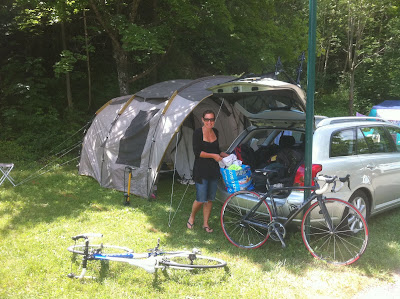 Base Camp in Modane for the Etape 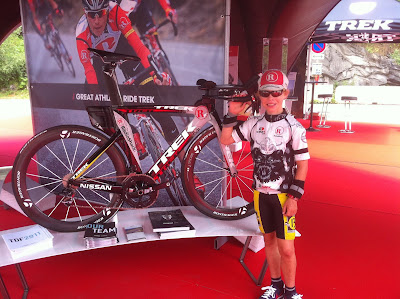 Trek Tent at the Etape Village 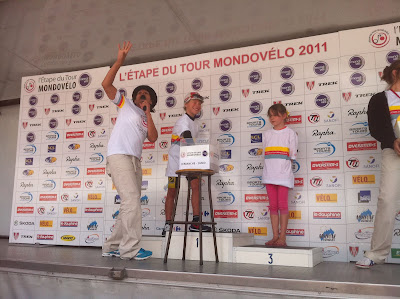 The whole Etape weekend was a lot of fun with camping, pasta parties, and an afternoon up at the event village. The race had 10,000 participants! This, I'm sure, required an incredible organization on the part of the organizers and sponsors. At the village, we ran into our friends from Wisconsin, Joe V and Liz. Always great to see their smiling faces in beautiful corners of the world. Joe writes a blog on the Trek website which you can check out here. The course was a little tougher than I thought. The Col de Galibier is a monster and at 2645 meters it is no small feat to pedal over. It is also no small task to make it up the Alpe d'Huez with 100 kilometers already your legs and when the afternoon sun on the south facing mountain is baking hot. You are, however, rewarded with beautiful views, and the knowledge that you have made it over some of the toughest cycling roads in the world. 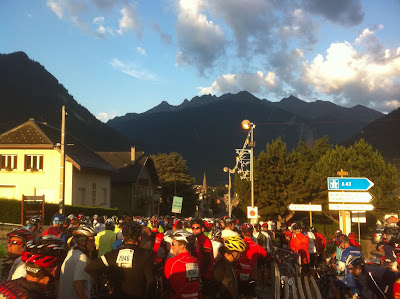 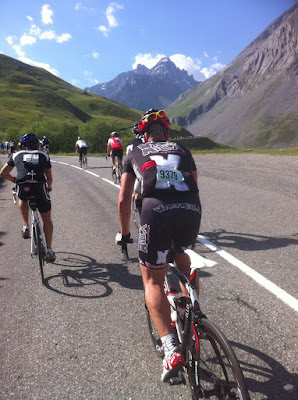 On the road in the Etape - slopes of the Galibier 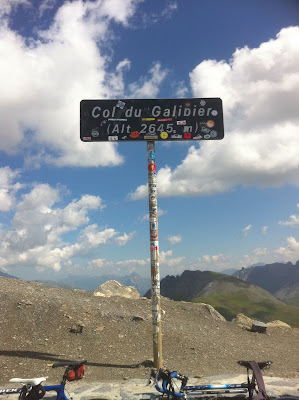 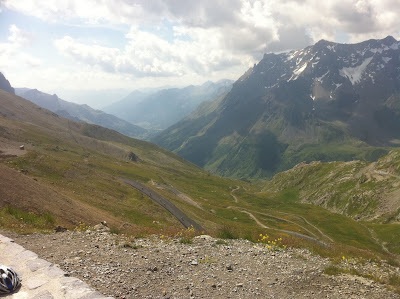 Long winding road of the Etape

I finished the Etape in 5 hrs and 38 minutes in the top 2000 cyclists. My time for climbing Alpe d'Huez at the end was 1 hr 37 minutes (22 minutes slower than we had climbed the mountain two days before). Not a stellar day, but I was happy to have finished nontheless. When you finish an Etape it also gives you intense respect for what professional cyclists do day after day over the course of 21 days in France. The Tour de France is truly one of, if not, the most difficult sporting events in the world. It will be awesome to see how fast the pros can do this stage on the 22nd of July. Can't wait to see the fire works as they rocket up the Alpe to the finish.

This is Bill and Liam signing out - and soon to be reporting from the last week of the 2011 Tour de France!

Livestrong, Train Safe, and Live Well!!!
Posted by Bill & Liam Flanagan at 2:35 AM