Bordeaux and Paris - A Wrap To The 2010 Tour de France And On To The Junior Vuelta in Assen, Netherlands

The final days of the Tour de France are always a marathon, whether you are riding the race, or simply trying to follow it as a spectator. This year was no different. The final stages of the Tour took place in Bordeaux and Paris - cities which are roughly 400 miles apart. I had never been to Bordeaux, however, I had experienced firsthand the flavor of the region through years' of enjoyment of the great wine produced in the area. The city itself did not disappoint. The town is built along the inlet of Gironde with beautiful cathedrals and cobbled sections of the old city. There are cafes, brasseries, and restaurants throughout. From my experience, the meals here are all about pairing food with wine that accents the flavors and essence of the creations. In Bordeaux, food and wine are truly an everyday art. This was a huge contrast to camping on the Tourmalet - where the standard was canned tuna and stale bread. Liam was excited to be able to get chicken nuggets and frites, followed, of course, by a scoop of ice cream. We were definitely back in civilization! 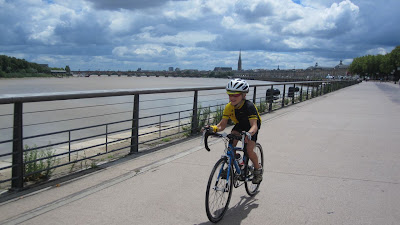 Ride along the Gironde in Bordeaux

In Bordeaux, we would be able to see two stages of the Tour de France. On Friday, a sprint stage would finish along the Gironde, and, on Saturday, the final time trial would be a point to point race from Bordeaux to Pauillac. We spent Friday morning riding along the Gironde and were able to ride the final few kilometers of the finish. It is always great to get on a closed of section of the Tour de France and tear it up. We were having so much fun that we actually road the final 2k finishing chute a few times. A headwind was coming off the river and could have been a factor in the race. We found a spot with a large monitor of the race about 150 meters from the finish. The sun was out and we were able to relax on the grass and take in the scene. We ran into Joe and his wife Liz from Wisconsin. It was fun to take it all in with them. The carnival atmosphere really started to pick up as the race approached the town. As Liam had predicted, the sprint finish was won by Mark Cavendish - in an awesome display of power. 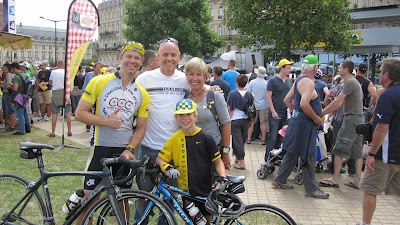 Fun taking it all in with Joe V and Liz

Next day was the time trial. Normally Liam and I ride the TTs, however, the logistics of getting back to Bordeaux from Pauillac and then getting to Paris that night were going to be too difficult. I also had some safety concerns about the roads. When you are not sure, it is better to give it a miss. We decided to skip the ride for now, but we will return to Bordeaux this fall, to do some more riding for sure. In any case, we were able to get a good view of the riders as they came through the city of Bordeaux. 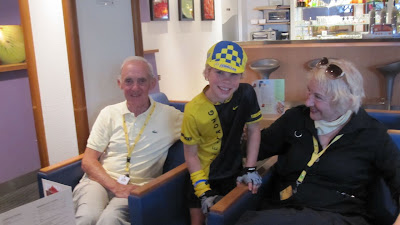 Liam with Mike and Clare Barry

On Saturday, we had the opportunity to take in some of the time trial race with Mike and Claire Barry. Mike and Claire are the parents of Michael Barry who was in the Tour and rides for Team Sky. Over the years we have met many of the parents of professional cyclists, and they share one thing in common - they are all very nice, down to earth people. Mike and Claire shared the story of Michael riding Mont Ventoux with his dad on a tandem at nine years old. We shared with them some of our Father Son Tour adventures. It was a lot of fun. The Barrys also told us about a youth stage race in Assen, Netherlands where they used to bring their son. Liam immediately wanted to do the race. The race is in its 46th year and is now called the Junior Vuelta. It is the largest youth stage race in the world and it takes place over 5 days with time trials, criteriums, and road races. To make a long story short, Liam is going to do the event which starts on the 2nd of August. (A little of the story - Liam turned 10 on July 27th and was eligible for his international USA Cycling license. We contacted the race in Holland and they had room in the event for Liam. We got the all the permission letters from USA Cycling by fax and we are good to go!) Unfortunately, there are not any hills in Holland, but the experience will be invaluable for Liam. He really wants to start learning race strategy from these kids over here! We will be reporting from Liam's first stage race next week on the blog.

After the TT in Bordeaux, we headed out to drive the 600 kilometers to Paris. We actually pulled into the City of Lights before midnight on Saturday night! Last year we didn't get into Paris until 7 in the morning on Sunday. It is a real feeling of accomplishment pulling into Paris after following a Tour de France. I can only imagine what the riders feel. Liam and I had 4000 miles of driving and about 1000 miles of biking under our belts. Sunday morning we headed out on our bikes for a Paris ride. The city has become very cyclist friendly over the last few years. During the weekend, they actually close off the road by the Seine to cars, and it is available to cyclists and in-line skaters. The Velibe program of free bikes throughout the city has been a huge success, and has resulted in drivers being much more aware of cyclists. We had a wonderful ride all over the city. I can't think of a better way to spend a morning in Paris. 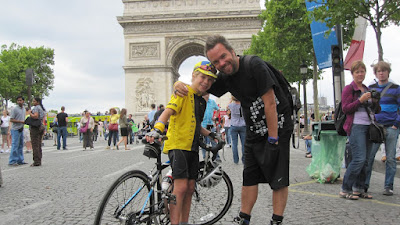 Gaby on the Champs

After our ride, we headed to the Champs for the finish of the Tour. We met up with Gaby Zwaan who had had come from a meeting with Doug Ulman, the head of the Lance Armstrong Foundation. Gaby had given his painting of Lance Armstrong to the Foundation. I think that it has found a wonderful home in Austin, Texas. Liam and I hope to see it at Livestrong HQ when we are there in October! 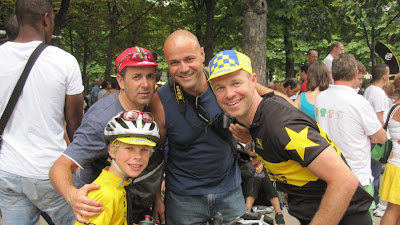 Sharing cycling tales with friends from the road

Liam and I met a group of Australians who had ridden many of the same climbs we had. We shared our tales of the road and watched as Lance rode up the Champs for the last time in his career, and the race was written into history. It was another great year on the Champs in Paris at the end of July.

This year, Liam and I have dedicated our Father Son Tour to the fight against cancer. 28 million people are affected by this disease. It is a number that Liam and I hope that someday in our life times will be 0. If you followed along and enjoyed the blog, please consider a donation to the Lance Armstrong Foundation. Link can be found on the right at the top of the blog. Together we are making a difference in this important fight. Thanks everyone for coming along for the ride. 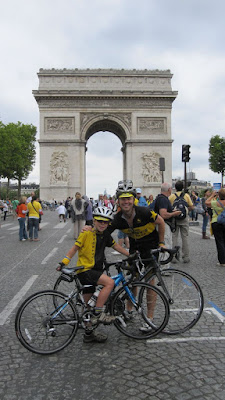 Bill and Liam signing out!
Posted by Bill & Liam Flanagan at 5:44 AM