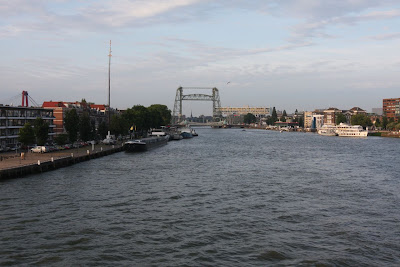 Rotterdam - Where the Rhine meets the sea

We got into Rotterdam on Thursday evening. Just in time to see the team presentations down by the Eramus bridge over the Rhine. It was incredible to watch the teams roll out by this river, and to know that its head waters start in Switzerland from where our journey first began.

The first thing we noticed about Rotterdam is that it is incredibly cyclist friendly! There are bike trails all throughout the city, and on the streets one often sees more bikes than cars. On Friday, we explored the city on trails by its many waterways and we crossed over several very cool bridges. The TT course was closed to recreational riders so we were not able to ride the course, however, we found plenty of other great venues to ride in the city. 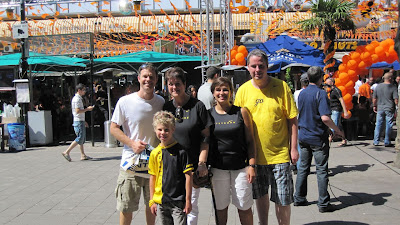 Friday afternoon we had planned to meet up with fellow CCC team member and Netherland Livestrong team leader Annemieke Janssens. Annemieke will be in Austin in October for the Ride for the Roses. She is a true example of the Livestrong spirit, and her dedication is incredible! We can't wait to see her again in Austin! We met up with Annemieke at a special opening for the artist Gaby Zwaan. Gaby will be painting 11 paintings on the roads during this year's Tour de France. (We have made plans to catch up with Gaby in the Alps and see him at work!) Gaby is a talented artist and his painting really capture the essence of his subjects. 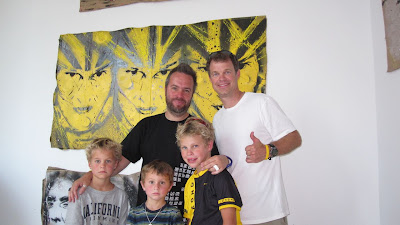 Gaby Zwaan and his incredible work

In the afternoon we also had the pleasure of experiencing the World Cup Soccer match between Netherlands and Brazil. We watched the game over lunch with Annemieke and two fellow Dutch Livestrong team members Manfred and Karen. It was a unique opportunity to be part of this special moment, when against all odds, Holland beat Brazil in the World Cup quarter final. The town at first was in shock and then everyone went wild -- Music, horns, lots of dutch beer, and, of course everyone jumped into the fountain in the center of town! It was great to share this moment with our new friends from Holland! 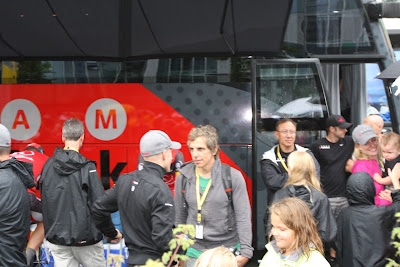 The main event, the start of the 2010 Tour de France, took place on Saturday. It did not disappoint. Thanks to our friend Ken Hardacre, Liam and I had passes to the Start Village. These passes gave us front row seats to the biggest show in town. I hope that our video report captures some of the magic and excitement of the day! It is going to be a great Tour de France!

Bill and Liam signing out!
Posted by Bill & Liam Flanagan at 6:47 PM