Stage 17 - To the Mountains and into the Rain and Fog

At the beginning of the week, Liam and I drove 1000 kilometers or 600 miles to catch back up with the Tour de France in the Pyrenees. The final few stages are always the hardest to follow. The distances between stages seem to increase and the crowds are much bigger. This year the weather has been really tough. Conditions have been extreme both hot and cold. Tavi and the boys decided to stay in Switzerland and see the finale of the Tour on the television. It was probably a good thing because the next few days were pretty tough and at times miserable. It was a miserable that in retrospect was a lot of fun, but when you are in it you say to yourself, "what was I thinking!" The rain started as soon as we hit the town of Lourdes. In Lourdes we got some supplies and headed up into the mountains. In route we passed over many of the Livestrong messages on the road that had been made by the chalkbot. It was beautiful and at the same time a little sad to see all the messages to loved ones that had lost their battle with cancer. There were also many uplifting messages of survival and inspiration. Liam and I had left a message earlier that was printed on July 19th. We were e-mailed a picture of it. 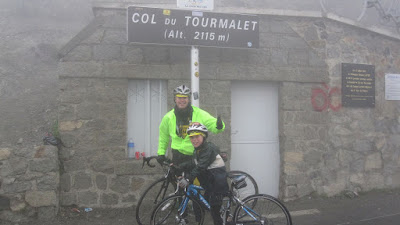 Top of the Tourmalet
The Tourmalet was socked in with rain and fog. It was useless to even pitch a tent. Liam and I ended up sleeping in the car. The first day we climbed the last 12k of the mountain in the rain and fog. The Tourmalet is a tough climb with a constant 10% plus grade. Liam was riding very strong as usual. In the last k or so we rode to the summit with a group of Dutch riders who were raising money for a children's cancer foundation. The ride which covered the entire route of the tour de France was called the Tour for Kika. It is always amazing to see all the inspirational things people are doing around the Tour de France. They are the stories within the story that make this race so special. 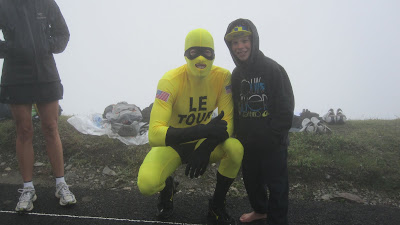 "Le Tour Man" Some real characters on the road
Race day the weather was no better. Liam and I hiked up the mountain in the rain to get a good spot to watch. We decided to watch about 1 and a half kilometers from the summit on a very steep section where attacks would be certain. The sun actually came out for about 4 minutes before the rain and fog returned. By the time the race came through visibility was about 50 feet. We had a blast, all the same, meeting the characters that were on the mountain that day. After the race came through, we hiked back down the mountain to our camping spot, packed everything up, and said goodbye to the mountain. We made it down to the Autoroute at midnight and to Bourdeaux at 2:30 in the morning. We tried to find a hotel room , but to no avail.... Yet another night slepping in the car! The finish of the tour is like the last few miles of a marathon it is a real test even for the spectators. In Bordeaux the next day a bed, a hot shower, a great meal, and a glass of wine was waiting. However, that will be in the next blog. 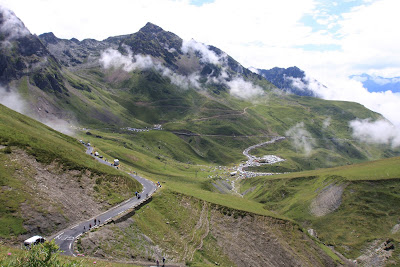 The Sun Came out for 4 minutes in two days
We are off to ride and watch part of the last time trial through the vineyards of Bordeaux. Livestrong, Train Safe, and Live Well!!!