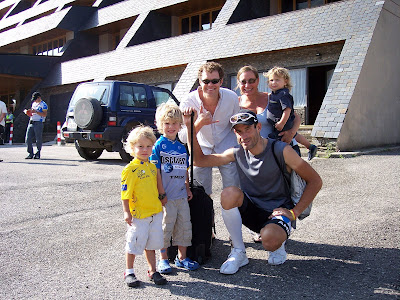 The "2009 Tour de France Father/Son Adventure" is inspired by a shared love of cycling, travel, adventure, and between a father and son. When my son Liam was six years old we lived in for one year in 2006. I watched Liam develop a love and a passion for all things cycling. Liam is a natural athlete and even at 6 he was riding 10 to 15 miles on his bike and had no problem running a 5k in under 30 minutes. It was no surprise that he developed an interest in European cycling and in particular the Tour de France.

During that summer we were able to travel down to and and follow some of the 2006 Tour de France. We took the whole family: myself, my wife, and our three boys at the time ages 6, 4, and 2. We called ourselves Flan Nation. We piled into our purple Renault Espace van and drove all the way down from . I had spent a year in high school as an exchange student in Catalunya, and I felt that this region of the Pyrenees would be a great place to start our Tour adventure. For our introductory stage I had chosen a mountain top finish in the Val d’Aran. It was a great venue for Flan Nation to experience firsthand what it was like to be part of this wonderful celebration of sport and human endurance.

We were hooked. That first stage was an incredible experience: from the family hike up the mountain, to the wonderful picnic in the high , to the rowdy Basque spectators we befriended along the way. The riders came through in a blur (it is hard to imagine that they can move up a mountain that fast). We were able to see the race snake its way up the switch backs we had just spent all morning hiking, then pass our little picnic spot. The actual pass was over in just a few seconds, but it is just a small part of the whole greater experience. We were starting to be woven into what is the fabric of the race. It is a great tapestry of sport, human emotion, beautiful scenery and friendships formed with fellow spectators that transcend language and culture. Liam got this at 6 years old. He understood that the Tour was more than just who won or lost. It was a tradition and a celebration of life and the human spirit.

After that stage, we happened to stay at a hotel in Vielha, with the Discovery Team. I say happened, but it was actually more of a product of not planning where to stay that night and seeing the Discovery vans in the hotel parking lot that made that hotel an attractive option. Were we stalkers? I don’t think so, apart from Liam saying “Where’s Hincapie?” a few times at check in. We ended up having dinner that night with the team and seeing them again at breakfast. I know of no other professional sport where you can walk in and literally join the players for a meal. That is cycling--- a sport that is right there, accessible, tangible, real. We met Johan Bruyneel that night, and in the morning he told Liam that the Team was going to do something special for him that day. I don't know if that is exactly what he said, but that is how Liam remembers it. Before we left the hotel Liz Kreutz, now Lance Armstrong’s personal photographer, took a picture with our little camera of the family with George Hincapie. We all loaded up into our purple van and headed back into . We had planned to go all the way into the stage finish at , however, we got stuck just across the border inside . The roads had been closed for a few hours due to the approaching bike race. We found ourselves in a little French town at the base of the . The only way through the town was a round-about that had been closed due to the Tour. Nothing to do but pull the car off the road and find a good spot to wait and watch the Tour as it rolled on through the beautiful countryside of . It is the best type of traffic jam you can imagine. We found a spot on the front of the round-about to stand and wait. It was a beautiful sunny morning. You could see the local cafe coming alive and the old timers playing their morning game of boule. There was a very official French Gendarme in uniform, most of the locals and, of course, all who had been stuck by the road closure. It was a random unexpected turn of events, but it turned out to be one of the highlights of our trip. Liam was wearing a little Discovery jersey which he refused to take off. His little brother had a little TDF yellow jersey. I guess that with the kids in tow we became easy to pick out. When the race came through Discovery was on the front riding hard with Johan in the team car just behind. They actually waved to us. When I later said how remarkable that was, Liam didn’t seem the least surprised. According to Liam, they were planning something special just for him (the team's most dedicated six year old fan). It was an incredible sight to see the river of bike riders part and flow around that round-about. That day Yaroslav Popvich won the stage into Carcassone for Discovery, and that was my son Liam's introduction to cycling.

Now, three years later, Liam is 9 and he is biking 30 or 40 miles without missing a step. He actually beat me in a five mile trail race the other day. On that day, I decided that the time to return to had come. Father and son will experience the celebration of endurance and human spirit again. This time for 21 days over 2000 miles with bikes in tow we will weave ourselves into the fabric of the tapestry that is the Tour de France. We will be blogging about the adventure and sharing our experiences. Father and Son --- building bonds with their common love of sport and adventure.