Paris- Reflections on an Old Friend 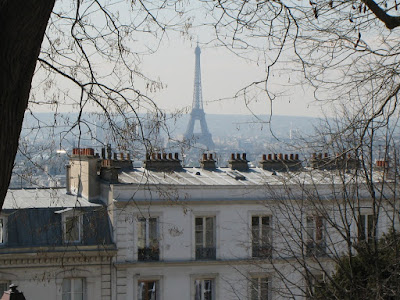 Arriving in Paris is like coming to visit an old friend. The main core of your relationship is just as you remember it, however, some catch-up is required to get to know the little changes that happen as time marches on. I think that sometimes we want places, and, for that matter, people to be frozen in a time, a place, and an emotional feeling. Unfortunately, in a fluid changing universe, to be frozen, leads to extinction. So, the relationship changes with each visit and continues to evolve in this dance of life.

My first visit to Paris was in the summer of 1984. It was a short visit and I have to say, that as a fifteen year old traveling alone, it was a little intimidating. That summer I had planned to start my first trip to Europe by meeting a friend from divorced parents who had a mother in England and a father in Greece. The English segment had been canceled, and the plan then changed for me to meet this friend in Greece a month later than planned. Keep in mind that this was before the airlines had been deregulated. At that time, a ticket to Europe was essentially interchangeable on any airline and to any destination. I had a youth hostel card, a eurail pass, and $800 spending money. There was no way that I was going to miss out on that much of what I had been planning for a year. I had changed my ticket from London to Paris, and really didn’t mention anything to either my mother or father. I flew from Nashville, Tennessee to Paris, France. And, that day, I met a friend that I will have for life. That day in 1984 I took one step out of the Gare de Nord train station, and after one look around, thought, “what have I gotten myself into.” I was a kid from Tennessee, I had never really been in a large city, I didn’t know the language, I was on my own, I was a bit scarred, but at the same time I had the feeling that this city and I were going to have a long, deep, lifelong relationship.

As with the first visit, each time I arrive in Paris I am a little intimidated. I think this effect is caused by the scale of the boulevards, monuments, and, quite frankly, the profound influence that this city has had on the evolution of western civilization. It is, as if, I am friends with an immortal Winston Churchill, or to make a better comparison Victor Hugo. Victor Hugo’s romantic work continues to have a profound lasting influence on western on art and literature. Paris continues to make a lasting impression on me, and I don’t think I’m alone. It is not the grand monumental aspects of the city, but rather the small peripheral interactions that form the lasting impressions. Perhaps, it is this contrast between the massive and timeless and the small and personal that has had such a profound effect. The small seemingly insignificant moments spent in this city have formed some of my greatest impressions.

Last year we were able to rent an apartment in Paris for the months of April and May. We moved our little cocoon to France for the spring. The biggest impressions from that time are a family picnic on the bank of the Seine dwarfed by Notre Dame, the boys racing small soap box cars below the Eiffel Tower, our afternoon family picnics in the shade of a single tree in Montsouris park, the boys’ rides on the carousel in the Luxembourg Gardens, the boys chasing pigeons in front of Sacre Coeur, and the family time together in our tiny apartment in the Montparnasse (the 14th arrondissement). These are all flashes of experiences in the past, but they have made lasting impressions on the person I am today and the bonds that hold our family together. It is human nature to want to grab these fleeting moments and not let them go.

We arrived in Paris today-- a forty year-old man and his eight--almost nine-- year-old son, and, as always, I felt a little intimidated. We rented a van at the airport and headed to the 14th. The feeling of a sudden nine-hour time change is always somewhat surreal. Liam and I spent the late afternoon and evening walking around our old neighborhood. We went to the park where we had spent so many afternoons playing soccer and having picnics, we walked past the old apartment on the Rue de General Leclerc, and up past the outdoor market on Daugere, by the entrance to the catacombs and back to the hotel near Montsouris park. The smell of the air, the trees, of the city can only be experienced here.

This trip our time in Paris will be limited to the first day getting over jet lag, and to the final day of the Tour de France. The city will be a backdrop for a very important fleeting shared experience between a father and his son that will last a lifetime. And, as always, I would expect nothing less from my old friend.
Posted by Bill & Liam Flanagan at 6:36 PM