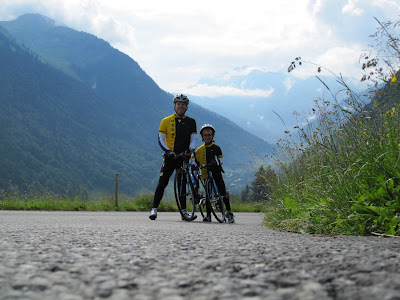 There is a unique feeling that you get when you hit your first alpine climb on a road bike. The roads in the French Alps don’t exactly ease you into a climb. Instead, the tarmac typically slams you over the head with a 10+ percent grade as the chemin winds its way up into the clouds. The French Department or region just south of the Swiss border, known as the Haute Savoie, has many examples of these great climbs on low vehicle traffic roads. It was a perfect spot for Liam and I to begin our training in France. 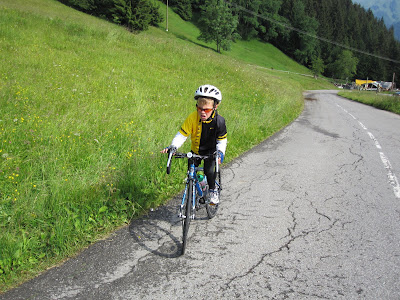 This morning Liam tackled his first alpine climb on a good section of the Col de la Joux Plane. This is not a climb of the 2009 Tour de France, however, when the climb is included in the Tour-- as it was in 2006-- it is classified a category 1 climb. (This rating puts it in the category of the most difficult climbs, of those, that are still classified, but not with the very most difficult climbs which are considered beyond classification. A rating system is in place in order to give these climbs points. The rider with the most points will wear the king of the mountains jersey. It is a kind of race within a race.) Liam pays a lot of attention to the climbs because they are his favorite part of the Tour de France.

The climb of the Col de la Joux Plane starts just on the outskirts of the village of Morzine. In the winter the town is a thriving ski resort, but in the summer it is practically deserted. Today, it seems, the only tourists in town were a handful of mountain bikers and some very old, but hardy, Swiss hikers. It was a perfect day for a climb in the Alps, and we pretty much had the mountain to ourselves.

When we first hit the climb it was a bit of a surprise for Liam. He describes the sensation as “hitting a brick wall, and then having to continue to ride up it.” We broke the climb up, and rode it in quarter to half-mile sections. We would take rest breaks between the sections to admire the views of the surrounding mountains and valleys below. Morzine sits at the confluence of six alpine valleys and the scenery is breath taking. The ascent up the Col gets you breathing pretty hard as well, so you need big lungs for this one! 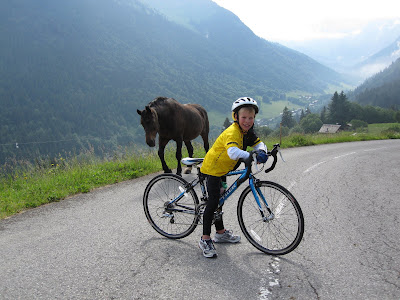 About half way up the mountain, we ran into a horse. When I say ran into him, I mean quite literally because he was standing in the middle of the road. We said “Bonjour” and then stopped for a few minutes to feed him some grass. The morning sun with its particular light was making the contrast between the summer alpine colors of deep greens and blues really intense. The air here also has a freshness and quality that is found nowhere else in the world. This was a particular treat for two Southern California guys who are not used to the freshest of air.

We didn’t quite make it to the top of the climb today, but we are going to do it again tomorrow morning. The descent was fun, and Liam loves to conservatively “bomb” them. To my relief, however, even though he uses the term “bomb”; he is being really cautious and riding well within his safety zone on the way down. We dropped down into the village just in time for a great French lunch in the local café. A description of our lunch would take up an entire blog entry of its own. (Our adventures in food will certainly be the subject of a Father/Son Tour dispatch in the near future.)