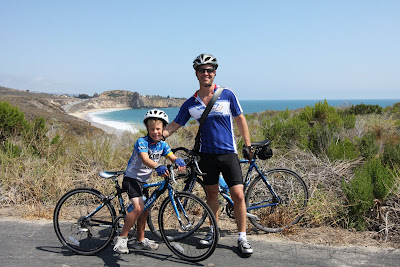 A few miles down the Pacific Coast Highway from our house is Newport Beach's best kept secret: Crystal Cove State Park. Crystal Cove is one of the last remaining stretches of coast line in Southern California that has been spared development and urban sprawl. The park has 4 miles of beach and about 3,000 acres of coastal terrain with several well maintained mountain bike trails. For the roadie (road bike rider) there is a good ten mile paved loop which is traffic free. An afternoon run or ride here brings renewal and lets the day's stress flow into the sand and out to sea. During our time away, this park was, perhaps, what I missed the most about Orange County. 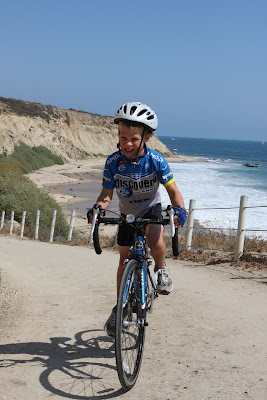 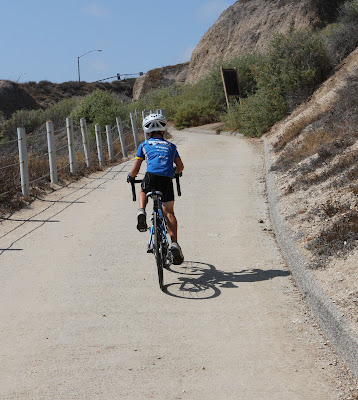 Wednesday is a short day at school for the kids. I got home at 2:00, and Liam and I decided to hit Crystal Cove with the bikes for some hill training. It was a beautiful day with the temperature in the mid 70's. We got in a good 10 mile loop. It has been amazing to watch how Liam has developed as a cyclist. His bike handling skills and his sense of position on the bike are remarkable for an eight (almost nine) year old. After the first loop, we picked a quarter mile steep 10% grade paved path from the beach up to the coastal bluff. I looked at the path and thought that it would be good for a photo, but that we would have to find something a little more gentle for the hill repeats. To my surprise, Liam was having no problem with the grade. He is an animal!!! 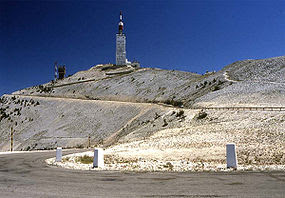 One of Liam's goals for the trip is to climb Mt. Ventoux -- "The Giant of Provence." He has a photograph of the "Giant" above his bed. This is an epic climb. It is so steep and long that the mountain's rating is beyond classification for bike racing. Professional bike riders take over an hour to climb to the summit. The record is held by Iban Mayo at 55 minutes. When we first talked about climbing this mountain I had my doubts, but now I am starting to think it might just be possible. . . 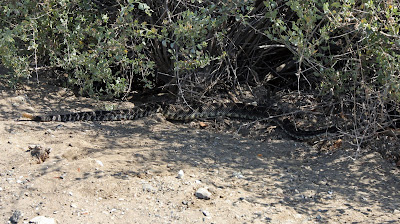 On the way out of Crystal Cove, we spotted this rattlesnake. Tonight is a school night so Liam is getting ready for bed. He does, however, want to make sure that we blog about how "awesome" he thought the day -- and the snake -- were.
Posted by Bill & Liam Flanagan at 7:57 PM