Racing in the Land of Tall Girls on Flat Fast Courses in Assen, Netherlands 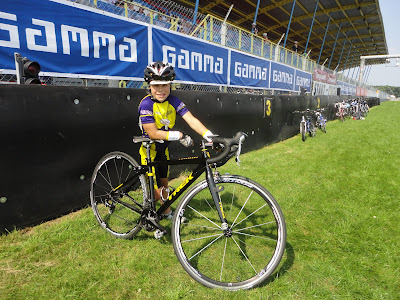 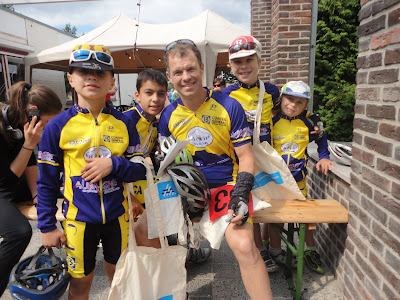 Assen is a small town in the north-east corner of Holland. It is probably best known for the Assen TT motorcycle and formula 1 racetrack. To us, Assen has come to mark the boys' biggest bike race of the summer - the European Junior Cycling Tour - a six-day stage race for kids that takes place every year around the 1sst of August. It was our second year in a row at the event, and I suppose it is becoming a bit of a tradition. You get hooked on the atmosphere of this race, which has become a sort of jamboree of youth cycling – a mini Tour de France. It is complete with camping, time trials, criteriums, classic road stages, cobbled sectioned omloops, and they even have podium presentations complete with podium girls and flowers. All you need is a little rock music and you could call it Cyclapoloosa. 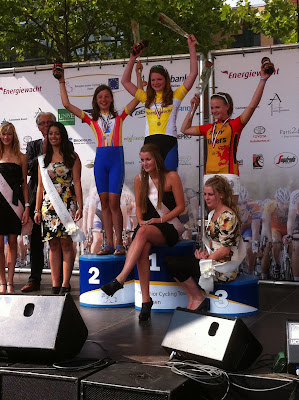 The podium after day 1 in Liam's Catagory IV, the girls are one year older and it seems one foot taller than the boys in the catagory 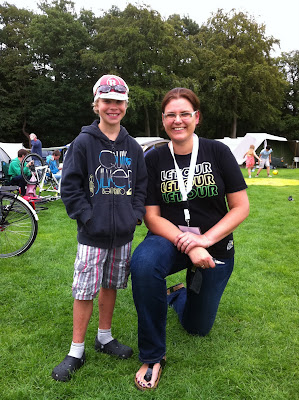 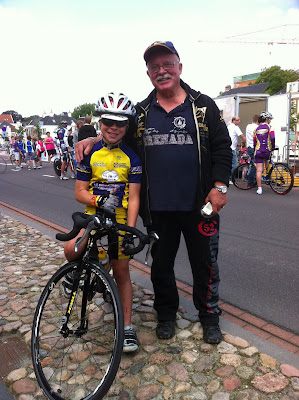 We spent the week in Holland camping, racing bikes, making new friends and catching up with friends we have made along the way. It was great to see Jose Been, a friend and reporter who has covered the race for the last two years. Also, several of our Dutch friends actually made the trip to Assen to spend a day and see Liam race! Gaby Zwaan came out for the second year in a row to spend the day and have lunch. I think Assen is really growing on him! Always great to see Gaby - the guy has got lots and lots of energy. We wish him well in his upcoming opening in New York. Our Dutch friends and Livestrong leaders Annemiekeh and Karen also came out and set up a Livestrong information booth at the opening ceremony. These guys really work hard at raising money and awareness in the global fight against cancer. It was great to see them, and hopefully we will see them again in Austin at the end of October. 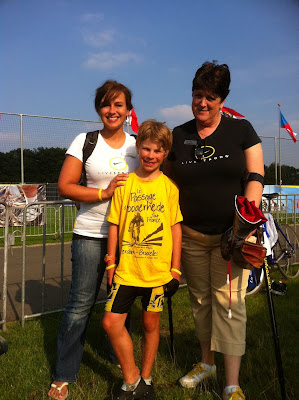 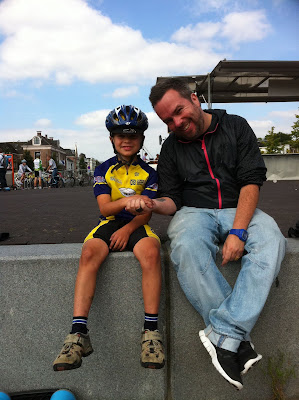 This year the Youth Tour had 800 or so kids, ages 8-18, mostly from Europe, but also from as far away as Australia. It is really a great venue for the boys to improve their cycling skills, discuss cycling strategy with fellow race participants, and learn to handle both the successes and set backs which naturally come with a bike race that takes place over six days. Professional rider Eric Zabel who was at the event with his Young Heros Canyon Cycling Project, called the event “cycling at its most pure and best.” 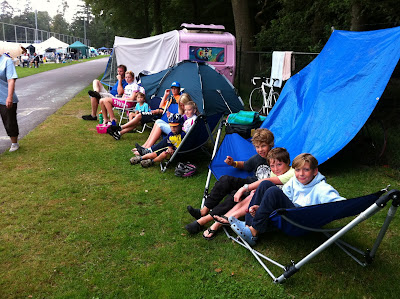 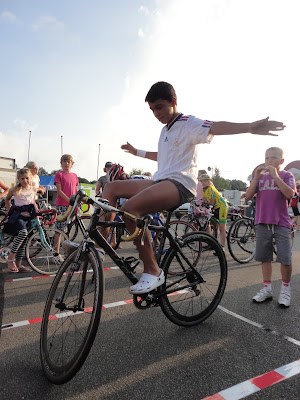 Sofiane on the way to winning the sur place competition

The only draw back to racing in Assen is that it is located 1400 Kilometers from our house in Provence. It is a long, long drive. This year all three Flanagan boys were racing, and we also brought along Sofiane who is a friend and fellow teammate of the boys. Liam had told Sofiane about the youth tour, and it had really captured his imagination. The trip was a big deal for Sofiane, as it was his first time out of France, and, in fact, first time north of Lyon. It turned out to be a grand undertaking. I got just a little taste of what it is like to be a director sportif for a cycling team with our team of four from the Velo Club Aubagnais. It is tough work! During the trip we passed through Luxemburg, Belgium, Holland on the way there, and Germany and Switzerland on the way back. 2800 kilometers covered in the car and many on the bike. We used rides in locations all over Europe to break up the trip. It was really quite the European cycling adventure. We went through a lot of pasta and even more bananas. Four boys can really eat when they are cycling everyday. 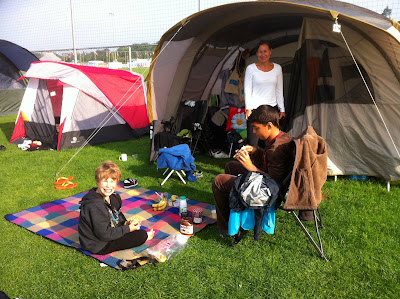 Base camp for the week long race

Day 1 – Prolouge- was a flat fast time trial. The course was an out and back kilometer along the canal in the center of town. There was a start ramp and timing just like in the pro races. Liam was 29th Aidan was 25th and Sofiane was 49th in there respective categories. The competition was tough and many categories had over 70 riders in them. Roan raced the Fat Tire division as he is not old enough to race in the 1st category. 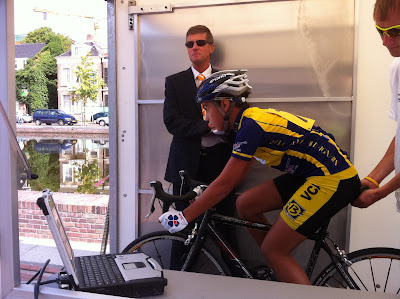 Sofiane getting ready to roll on Day 1 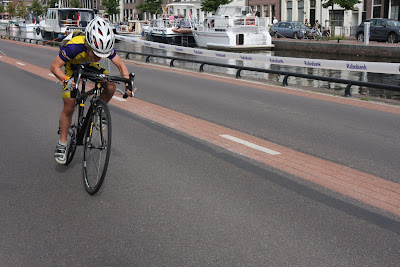 Liam bringing it home on day 1 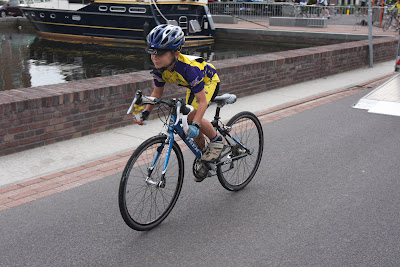 First taste of racing for Aidan on Day 1 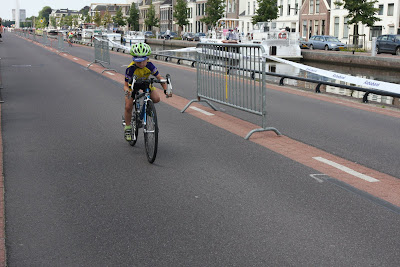 Roan mixing it up in the "fat tire" division

Day 3 Classic road stage. –The toughest thing for me on this day was getting all the boys out to their different start locations. The race was a true point to point race from the surrounding towns all finishing at the Wheeler Home where we were camping. This had been Liam’s hardest day last year, so this year he was extremely focused. He had a good race and finished with the lead group in. Sofiane also did very well this day and both boys were moving up the general classifications. Aidan had a good race, but lost some time to main group. The day was a rest day for Roan as there was no Fat Tire race this day

Day 4 Time Trial on the famous Assen TT race track - This is really a highlight of the race. The cyclists are able to ride a time trial on the actual motorcycle / Formula 1 track. All boys had time trials from 2k to 8.5k. Liam had a great day and had a 17th place finish which put him in the top 20 in the general classification. Sofiane was starting to feel the strain of multiday racing and had some trouble in the final kilometers. Aidan and Roan raced their first time trial. 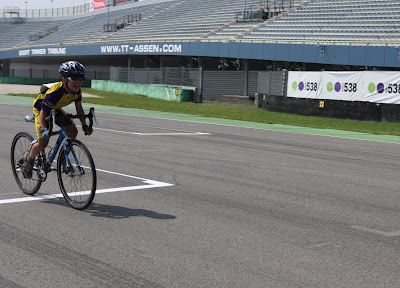 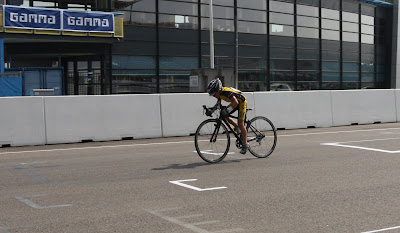 Day 5 Omloop - An omloop is like a big criterium course and in the Assen version it comes complete with its own section of pavé (cobblestones). This was a tough day. Speeds were high and the course was technical. Liam had a touch of wheel and subsequent fall. He could not bridge back up to the lead group, but finished at the head of the second group in 25th for the day. This was the hardest day for Sofiane as he just didn't have the legs. Aidan had his first taste of the cobbles and really liked it with a 24th place finish. Roan had the dayff as there was no Fat Tire race. 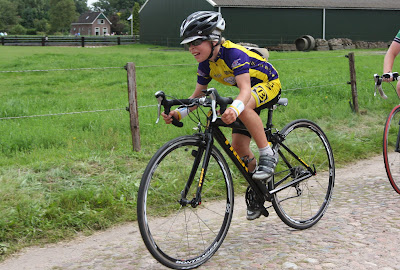 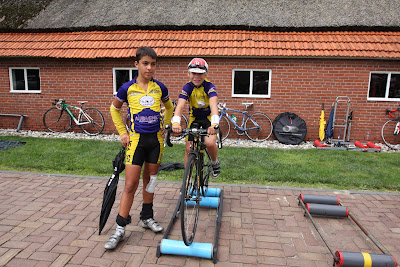 Sofiane and Liam five days in - Cycling is a tough sport

Day 6 Final Criterium - The last stage of the Tour is a criterium which takes place on a course all around the main campground of the race. All the boys did very well this day and were able to finish in the main groups.

Roan finished the Fat Tire Race and had lots of fun

It was another great year of making friends and racing bikes in Assen! 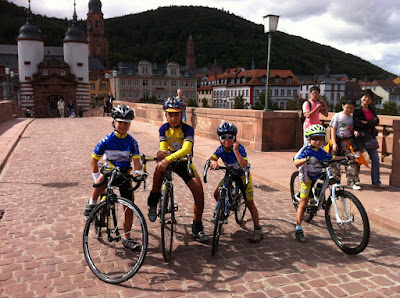 After the race, the "team" rolling in Heidelberg, Germany

This is the Flanagans signing out!