A Ride through Hell – The Paris-Roubaix Challenge 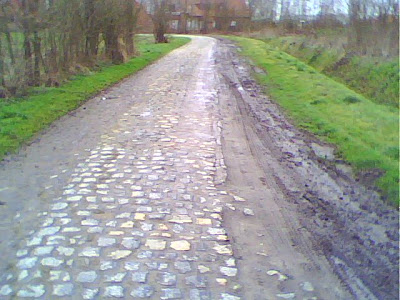 “What was I thinking?” These four words were the first thing that came out of my mouth after I had processed my payment and had managed to officially get myself on the start list of the first ever Paris-Roubaix Challenge bike race. I was kind of speaking out loud and to myself because, at the time, there was no one else in the room. I knew this race was going to really hurt and be insanely difficult. I couldn’t even be stopped by the race website’s “Welcome to Hell” scrolled across the home page. After seeing this disclaimer, is a normal reaction supposed to be -- “Oh, yes please! Where do I sign up and turn over all my credit card information? I think a day spent in hell would be a wonderful addition to my spring itinerary of walking on broken glass, sword swallowing and other random acts of self torture”?? 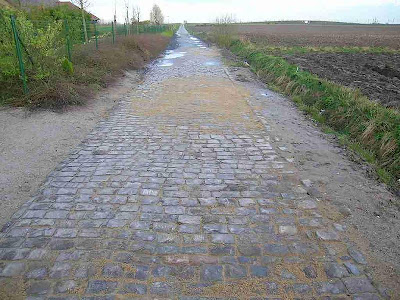 Another beautiful view of the scenery for my upcoming "special" Tour

It is now official. Come April 9th 2011, I will be in Northern France to toe the line with 3000 crazy masochistic cyclists for the first ever cyclosportive addition of the Paris–Roubaix spring classic. Paris-Roubaix has a special place in the mythos of cycling legend. This one-day bike race is considered to be the Queen of the spring classics, and perhaps the second most famous bike race after the Tour de France. It is also known to be one of the most difficult one-day races. This year, the first ever amateur version of the classic will take place the day before the professional race, and will run over much of the same course. For the Challenge, the start will be in Saint-Quentin and the finish will be some 100 miles/162 kilometers later in Roubaix, France on the city’s famous velodrome. 100 miles over a windy barren landscape can be tough, but what makes Paris-Roubaix standout is the insanely difficult cobble sections that are thrown in along the route. There will be nearly 40k of cobbles (or pavé) as they are called in France in the amateur event spread out over 18 jaw-pounding, bone-rattling sections.

One might think that the race organizers were just trying to be sensationalists by all their comparisons of the cobble sections to riding through hell. I know from personal experience, however, that there is no exaggeration here. Last year Liam and I experienced some of the course first hand. It is absolutely brutal. Miles and miles of pavé beat and rattle the body and the bike. Riding the pavé is not like riding on a gravel road it is more like riding across a small boulder field. “Ouch” is the best summation of the experience. 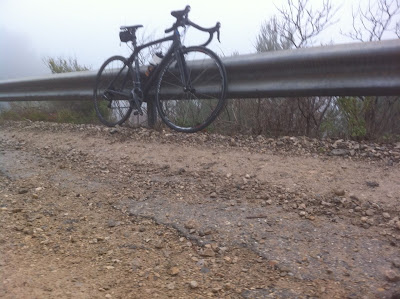 Quality of roads I ride these days!

My winter riding has taken on a different character with hell soon to be on the horizon. I now look for rough roads to train on. If I see a pothole or rough spot in the road I will intentionally go right over it. If I get back from a ride and I don’t feel rattled to the bone then I feel like I have not done enough. It is hard to describe the amount of rattling the pavé can produce. Not even potholes do it justice. Then there is the question of bike modifications. Wider tires seem to be one of the most important changes that you can make to a road bike to cut back on vibration. At this point, I’m debating between 25c and 28c tires. I have heard that special latex inter tubes also help although I have never used them. I have also been told that Anti-vibration bar tape and perhaps a special saddle could aid with my tour of the underworld. I have a few months to figure it out, and until then I will be here rattling myself into shape.

In case you missed it -- Liam and I did a recon of some pavé sections last summer.

Liam has smartly decided to leave races like Paris-Roubaix to the future. Both he and his brothers are, however, planning to come up and watch their old man suffer, and then take in some really great racing the next day watching the pros do their thing. All in a perfect or not so perfect spring weekend in France!