In France the Meal is Serious Business 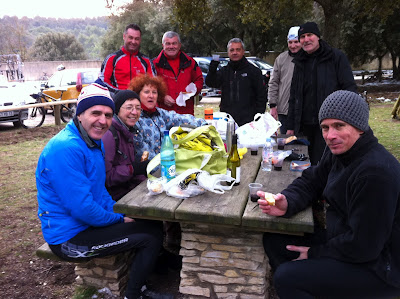 Getting in the all important lunch - Mountain bike outing

It took me awhile to realize the full extent of the importance and place of the meal in France. I knew that the French like their food; I also knew that the food was a cultural thing, but I never realized just how deep this goes. All meals are important in France, but lunch is the most important. It seems that the whole country shuts down for this mid-day meal. Lunch is usually served between 12 noon and a half past the hour. It will last anywhere from 1 to 2 hours. The French also do not believe in lunch on the go. The idea of grabbing a sandwich and eating it on the run is barbaric to the French. I once made the mistake of eating a sandwich on a street corner of Paris. I got all kinds of strange looks, however, the looks of horror were usually followed by a polite “bon appetite.” It just took the people a few seconds to recognize that my barbaric act on the curb was actually a form of the sacred ritual of eating a meal, and, once they had made the connection, their instinctive manners and meal etiquette kicked in.

It is a cultural thing and people need to be accommodated. In all the major department stores you will find restaurants, and at noon, sure enough, you will find people sitting down for proper meals. Cloth napkins, real silverware, entrees, main courses, wine, cheese plates, and desserts are all very common - even at the local sporting goods store cafeteria. 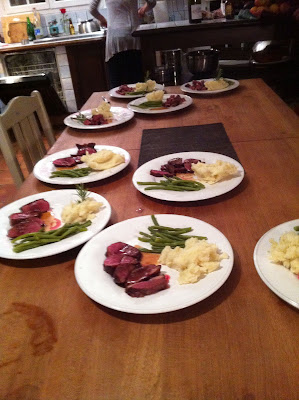 Proper meal presentation and prep is all important

I don’t think there is any aspect of French life where the lunch priority principle doesn’t apply. I was a chaperone for Liam’s school mountain bike team a couple of weeks ago. It was an all-day biking “raid” (serious group riding) on some pretty radical trails out in the local mountains. It was cold and the conditions were very difficult with lots of snow and ice on rocky trails. We biked for a few hours in the morning - doing a loop to end at the parking lot just in time for lunch. I was thinking that we would just grab our sandwiches, and then head back out on the bikes....Not a chance. I quickly realized my mistake when we got the looks of disbelief when Liam and I grabbed our sandwiches out of the car and almost started eating. No, it would not go down this way, not in France. We would all sit down together at some very cold stone benches in near freezing temperatures and enjoy nearly an hour lunch. The adult accompagnateurs were at one bench and the kids were at the others. We had our sandwiches, but there was also cheese, fois gras, wine (yes, even on a mountain biking trip), some small cakes for dessert, and coffee and tea at the end of the meal. I made the mistake of asking for some tea mid-way through the meal. (When you stop riding you get cold quickly). Although I was given the tea, I discovered that it was not proper etiquette. The French all waited till the end of the meal to have their tea and coffee because that is just how it is done. Never mind that we are sitting out in the woods on a mountain bike trip. It was a nice lunch with great conversation, but not what I had expected. After lunch we hopped back on the bikes for another three hours of riding (red wine and all). 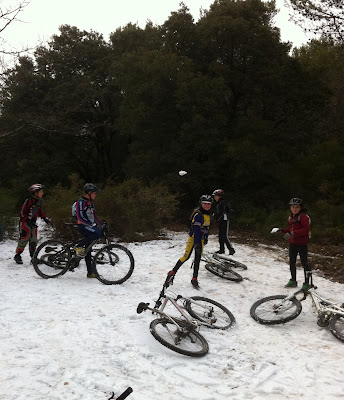 Another example of lunch taking priority over all occurred last weekend at Liam’s first swim meet here in France. Liam has started swimming again with a club at the piscine Alain Bernard in Aubagne. Liam had been away from competitive swimming for 2 years and he was starting to miss it. Swimming is really an important piece of his training and the conditioning really pays off on the bike. More about that in a future blog post, but for now back to the importance of the meal here in France. 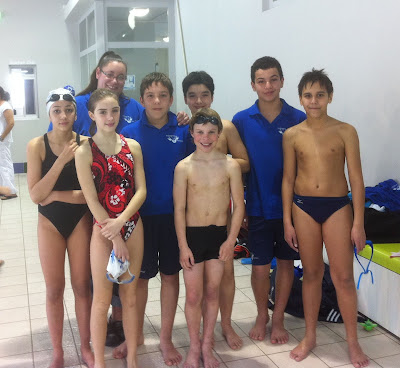 Liam was swimming the 800 meter freestyle and the 50 meter back stroke in the morning and then he had a butterfly event in the afternoon. I noticed on the schedule that there was 2 and ½ hours between the sessions. I have been in France long enough to know that the lunch principle had to be involved. When we arrived at the meet the organization was handing out flyers that included directions to a cafeteria where the entire competition would meet for lunch. At 11:30 the competition stopped, the pool facility was locked up tight and everyone (teams, coaches, parents and judges) got in their cars and headed a few miles down the road for an hour and ½ lunch. We ate together as a team and it was very enjoyable, but the whole affair seemed somewhat odd from the American perspective. After the meal everyone got back in their cars and headed back to the pool, where at exactly 2 pm the doors were opened and the meet continued where it had left off.

In France the people take their meals seriously, because it is during these times that human relationships are cultivated. I guess back in the US we would be known as lunch snobs - turning our nose up at fast food and paper napkins. I think that after you become used to eating in this "civilized" manner it is hard to go back to grabbing lunch on the run, not to mention, what havoc it wreaks on your new found digestion. 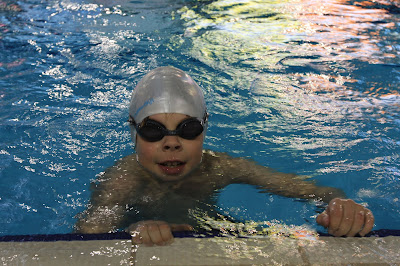 By the way, Liam won the 800 meter freestyle on Sunday in his first competitive swim meet in two years. It must be due to all those great meals he has been having!

Bill and Liam signing out.