Cultural Adventures in the Land of Cheese and Chocolate

The Tour of Switzerland (TDS) ended on Sunday with an exciting time trial in Liestal, Switzerland. Liestal is a small town in the Jura region of Switzerland very close to the German border. Unfortunately, the weather has been pretty miserable for the last 5 or 6 days. We did actually see the sun for about 5 minutes while we were riding the time trial course just before the stage. But by the time the race was underway the rain had started again. We did manage to get some video from the stage, and we had a lot of fun out there despite the conditions!

Liam has grown up riding in Southern California so the brutal conditions of the last week took some getting used to. Liam loves to ride in the rain, however, rides in the cold are another story. High 40’s F or single digits in C are not temperatures that we are used to in the summer. In fact, there are only a few days in the middle of our winter that we have ridden in these conditions. When the rain backs off it is actually quite pleasant. We are adapting to the cold, probably just in time for scorching hot temperatures out on the roads of France in just a few weeks time!

Here is a little snap shot of our first two weeks in Switzerland:

In the last two weeks, we have eaten a lot of brotwurst, have learned to like the Swiss soft drink Rivella, have eaten way too much cheese and chocolate, picked up a fair amount of Swiss German, made a lot of new friends out on the road, watched a few World Cup soccer games with the locals, and have seen some great bike racing! A memorable moment came when the Swiss beat Spain last Wednesday. The good citizens of Thun headed down to the main square in town, and were jumping into the fountain in their underwear! (So much for the Swiss conservative stereotype!)

In Switzerland you have to pay for the trash you create. This makes for a great incentive to recycle! It is amazing how much waste a family of five can create! I never really realized just how much we throw away every day. Now we recycle everything – paper, plastic bottles, glass, corks, you name it if it keeps it out of the trash we are recycling it! My goal will be to get down to one 35L bag for an entire week! That might be a good basis for a reality show. However, the show would get no advertising revenue because the concept just might kill consumerism.

I also realized that we are very loud! Americans in general have big mouths. Apart from the fountain incident after the World Cup game, I think we are the loudest family in Switzerland. Keeping three boys under 10 quiet is a challenge. I like quiet and understand the concept, but somehow we just can’t help it. Maybe Americans are just born to be loud! In any case we are trying. Quiet voices inside and out, no running in grocery stores, and on Sundays absolutely nothing that would disturb the peace. No mowing the grass, no recycling (the sound of bottles crashing is way too much), no loud barbeques – It all makes perfect sense, but is really hard not to blow it and end up disturbing someone. And although I don’t understand a lot of Swiss German I get the “Oh well, they can’t help it. They are just the Americans.” Look. 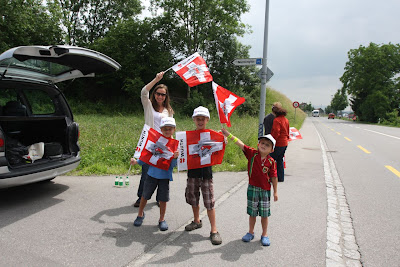 We may be loud, but we love Switzerland!

Through all of these adventures in new cultures, food and languages we are having a very good time. This is an adventure that is already bringing us much closer as a family. Just maybe we will be a little quieter from it, and perhaps not produce as much trash. But I think I will always like a good, loud Sunday barbeque! It is just in our DNA.

Bill and Liam signing out.
Posted by Bill & Liam Flanagan at 1:49 PM